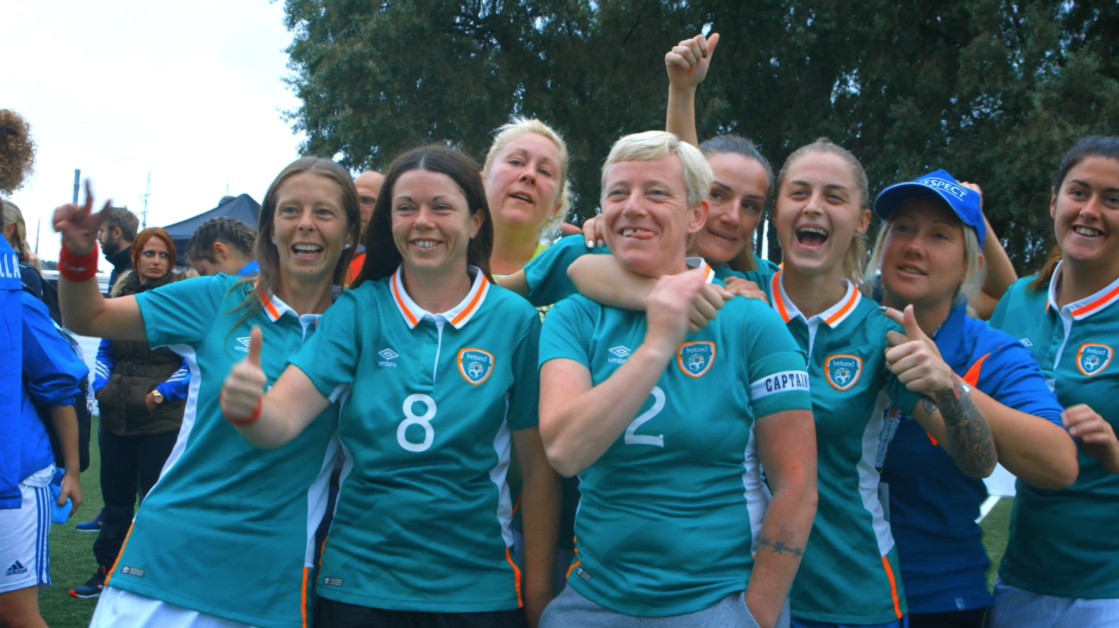 In 2003, Sean Kavanagh, editor and manager of The Big Issue magazine in Ireland, brought a team of homeless men and women to compete at the inaugural football Homeless World Cup in Austria. Kavanagh is an astute and far-sighted individual – by witnessing first-hand, the mental and physical benefits that could be found through playing a team-sport, he decided to launch a group that would enable the group play football throughout the year while they also reaped the rewards of social interaction.

With this in mind, Kavanagh, along with Dublin City Council, set up a pilot project in 2004 with a particular connection to the inner city. This project became so successful that in 2005, the league was expanded to encompass the greater Dublin area and became affiliated with the Football Association of Ireland in the category of ‘Football for All’.

At this juncture, there are 13 Homeless Football Leagues set up across Ireland. The target group for the leagues are among the most vulnerable in Ireland – they consist of the homeless, drug and alcohol dependants who have entered rehabilitation, ex-offenders, long-term unemployed with learning disabilities, refugees and asylum seekers, and finally, those who avail of hostel and accommodation centres.

The voiceover on opening scenes of Street Leagues, tells of how there are currently 10,500 homeless people in Ireland with a 280% increase in a space of five years. As more Homeless Football leagues were set up, it became apparent that involvement in sport and team building was a key aid to connecting with others, finding confidence, and a renewed sense of self-worth. Sean Kavanagh states that it costs around €80,000 to keep someone in prison for a year. Bringing two coaches and teams of football players, along with other key personnel to Oslo for the Homeless World Cup, covered roughly the same budget. In his opinion, there should not be any argument as to which of the two is the better option.

Kavanagh’s opinion is supported by actor Colin Farrell who has joined forces with Dublin City Council by becoming an ambassador for the Homeless World Cup. Farrell speaks passionately of his own circumstances – he tells of how he was once an addict, suffering from a dependency on alcohol and drugs. Farrell has the utmost compassion and sympathy for those who find themselves living in straitened circumstances. He understands that people yearn to live with dignity and meaning. The Homeless World Cup has given its members purpose by recognising the value of sport in developing character.

Coach and former player, Graham Tucker, is deeply committed to his team mates – he maintains playing football saved his life. “When you are playing football” he states, “you leave everything out of your mind”. Passionate about the sport, Tucker is Intense and steadfast in his leadership role as coach. David Bissett is captain of the men’s team. He admits that prior to taking up this position, he did not know how to live life without being ‘clean’.

Tara McNeill, a member of the women’s team, was shy and reticent when first approached to play football. McNeill admitted that she thought she was too old to play. She wryly confesses to being a grandmother and is consumed by love for her family. Nikita Farrelly speaks about how much football means to her – she too is a recovering addict. Christine Geoghegan says her dad’s anniversary and birthday were around the time of the Homeless World Cup and acknowledges that it has been hard on her – her father passed away from suicide. Geoghegan is adamant that this type of endeavour builds self-esteem.

The trip to Oslo where the Homeless World Cup is playing, is filled with trepidation and excitement. The teams are seen sporting their team kit with Irish flags wrapped around their shoulders. They march through the streets, laughing, chanting, singing. The overarching sentiment is one of utter joy. Over the next few days, games are won and lost but regardless of outcome, all of the players are replete with pride in what they have achieved. Jamie Leahy describes how confident he has become. Dillon Sheehan calls on others in a similar situation to know that there is always light at the end of the tunnel. Philip Doyle says that we are afraid to ask for help and there is a feeling of worthlessness. After playing in the Homeless World Cup, he claims we are part of that something in life. He encourages people to pick up the phone and talk – by reaching out, Doyle maintains that you reconnect with life.

A year later, the success story continues. Philip Doyle has a full-time job and is training teenagers to play football. Nikita Farrelly has welcomed her first son and says she has never been happier. Tara McNeill feels confident in her abilities stating that she has a lot to give no matter what her age – she continues to play football regularly. Dillon Sheehan is about to start a FAI course. Johnny Makumbu now has a full time job and says everything turned around for him after he competed in the Homeless World Cup.

Powerful, humbling and inspiring, Street Leagues is a moving testament to the indomitability of the human spirit.