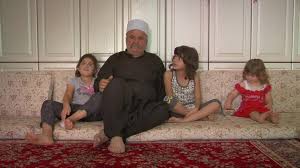 Can a people maintain their national identity when they are no longer part of the nation that created it? It’s this question Irish filmmakers Keith Walsh and Jill Beardsworth examine in Apples of the Golan. Since its annexation by Israeli forces in 1967 Golan Heights, unique for its apple exportation, has seen its number of Syrian Arab villages shrink from 139 to just 5. It’s the inhabitants of one of these remaining villages, Majdal Shams, who are the central focus of this documentary. Divided from loved ones left behind in Syria, their resources being siphoned exclusively for Israeli citizens, and with civil war simmering just over the border, these ‘undefined’ citizens cling to the dream that they will soon be reunited with the ‘motherland’. Beautifully shot and with a straightforward approach, this is a thoughtful insight into the lives of those existing between two worlds.

As the title suggests apples play a core part, both economically and culturally, for the people of Majdal Shams. At one point an Arab apple farmer cuts the fruit in half to reveal it has five seeds in its core to reflect the five pointed star on the Syrian flag. He also claims that the apples that grow on Israeli farms contain six seeds to reflect the six points of the Star of David. Later on in the film an Israeli farmer cuts open his apples to reveal that there are, in fact, only five seeds in all the apples that grow in Golan. Walsh and Beardsworth employ this symbolism to the degree that it begins to feel a bit forced; apples appear in shots where it’s clear that they were strategically placed there to make up the frame.

Overall, however, the two director’s style remains unobtrusive and they allow their subjects to speak for themselves. Put together like an odd patchwork quilt we are given shreds of individual lives which, though each separate and unique, are intrinsically interwoven with one another. There’s a distinct difference in opinion between the older and younger generations. The older residents of the region, who recall life before Israeli occupation, believe the situation to be strictly black and white. This is most evident in one particularly memorable character that continually pops in the film who holds President Bashar al-Assad in an almost religious reverence. Given what is reported of Assad’s regime in Western media it’s fascinating to watch him being practically worshiped by virtue of being the president of Syria, ethics be damned.

The younger generation, who have never known life outside Israeli occupation, tend to appreciate more so the greyness of politics that rule their lives and question whether re-joining with Syria would actually be for the better. One particularly jaded young man points out that the only reason apples are so important in their community is because they are the only thing that lends their region a distinct identity. These people are musicians, dancers, rappers and academics but the shadow of occupation hangs heavy over them all as they strive to form identities independent from their unclear national one.

This is a very humanistic film, un-judgemental in its observations and finding the extraordinary in ordinary moments. However, the film was also made on the idea that the viewer would already have a relatively well informed knowledge of Syrian/Israeli politics before watching. The directors do not hold the viewer’s hand throughout and provide only the most basic historical context. Basing their film on this presumption means that its content will lose a lot of meaning for those who did no research before heading to the cinema. But, to give Walsh and Beardsworth their due, this is a film that is first and foremost about people.

A skilfully crafted film, Apples of the Golan sheds light onto a subject that more people need to know about. Recommended.