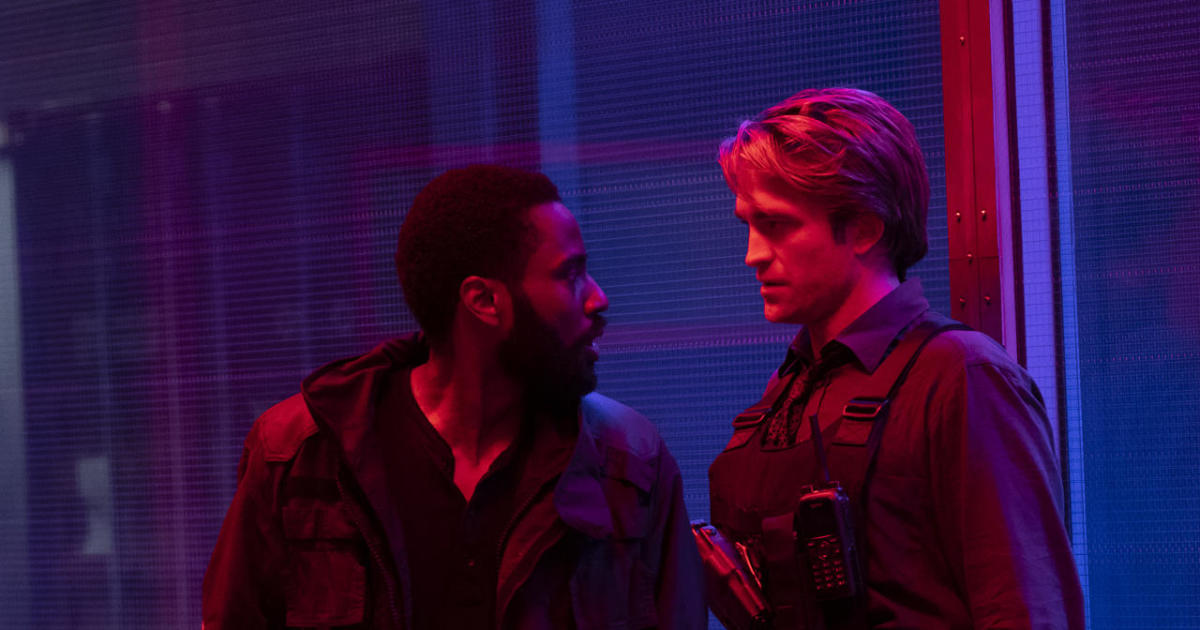 Tenet marks the 11th feature from powerhouse auteur writer/director Christopher Nolan.  Nolan movies have become a signature event, ardent displays of cinematic prowess from the hands of a virtuoso talent. And Tenet is a hall of mirrors that rockets explosively with ambition. It’s a kaleidoscopic odyssey through time, that reaches for the same transcendent heights as Inception.

Armed guards clad in riot gear storm an opera house. Their mask covered faces stealthy angle around corners . Boots trample and kick in doors.  Automatic rifles are raised and take aim. Shots ricochet. They appear to be eliminating  hostile mercenaries in an effort to retrieve a mysterious object. All that’s clear is a pervading sense of dread and urgency, and then the building nearly explodes. A CIA agent, known only as The Protagonist (John David Washington) barely survives this botched operation and desperately swallows a suicide pill. When he wakes up, he’s greeted by a government official who coolly states “Welcome to the afterlife”.

The Protagonist is quickly initiated into a covert agency called Tenet, and is tasked with preventing some unknown doomsday catastrophe which involves objects traveling backwards in time.  So, the stakes couldn’t be greater as The Protagonist sets off on a globetrotting race against the clock.

Nolan is a pioneer, and a visionary, and seems set on pushing the expectations of the audience further and further. The action is operatic, and towering in its originality, Images like these literally have never been made before. But in many ways Nolan seems to have tried to out Nolan himself and got lost in a space that can only be described as pure Nolanness.  Tenet takes a more cerebral approach and owes a striking debt to the espionage movies of the late ’60s and ’70s. It’s a robust and emotionally sparse thriller, that highlights concept and theme in favour of character,  and at times loses narrative momentum because of it.  But this is a purely cinematic experience, and something which goes beyond narrative storytelling. This is a cinematic leap of faith, you only need to take the first step and Nolan’s head-scratching, jaw-dropping mind-fuckery does the rest, there’s no half measures here.

Lets talk about John David Washington, he’s a staple of strength and charisma, and is tirelessly athletic as the CIA agent The Protagonist. He brings a potent sense of dimension to a character whose motive is to serve and protect at all costs, and he gives a ballistic performance. He’s joined by Robert Patterson’s verbose spy Neil, and together the pair yo-yo through time with an acrobatic dynamic and flair that unmissable.  But the heart of the film honestly rests with Elizabeth Debicki’s Kat and she brings a harrowing loneliness and grace that’s magnetic to watch. She’s literally the rock this film is built on. And Kenneth Branagh is ferocious as the steely Russian oligarch Andrei Sator, who seems to hold all the cards in a vice like grip.

Tenet is Nolan’s ode to James Bond by way of David Lean and Nicholas Roeg, think the epicness and scale of one master through the sterility and intelligence of the other. This vision is brought to life by Nolan’s comrade in arms Hoyte Van Hoytema, who’s immersive cinematography radiates with humanity. This is complimented further by the wrestling synthesisers and drones of Ludwig Goransson’s score. Theres a menacing temporal force to the score that bolsters tension with a capital T. It literally embodies the temporal conflicts of the film, as sounds push and pull between past and present.

Tenet is a dance of death fully loaded with temporal paradoxes and inversions, and it’s an invigorating foray into uncharted territory. We’re all gravitating towards some unknown, hurtling towards our destinies, trying to shape them, fighting tooth and nail. At its core this is what Tenet‘s about, but in ways it lacks the emotional sustenance to really deliver this mantra to a modern audience.  The more cerebral approach keeps the film trapped in a self-conscious twilight zone. It’s an intricate Rubik’s cube of a film that races, hurtles and drags through time and never quite pieces itself together. But in this ever-changing world in which we live in, we need filmmakers like Nolan, who dare to be bold and try to look at the world differently.