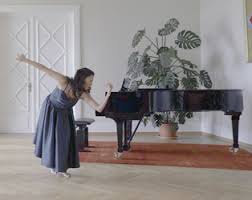 Irene Falvey attended an IFI screening of Horrible Creature, Áine Stapleton’s film based on the life of Lucia Joyce between 1915 and 1950.

Áine Stapleton’s film Horrible Creature featured at the IFI as part of the First Fortnight festival on 8th January.  The feature is the second in Áine’s trilogy of films which depict the life of Lucia Joyce, James Joyce’s daughter who was a talented dancer. Lucia’s life was considerably altered by her time spent in and out of psychiatric care across Europe from the early 1930s onwards. Horrible Creature was a pertinent choice for the festival as it explores both creativity and issues surrounding mental health.

A stunning visual experience, Horrible Creature focuses on Lucia’s life from 1915-1950, providing a glimpse into Lucia’s childhood, her years as a successful dancer and her experiences of mental asylums across Europe. The narrative is told through highly interpretative and experimental dance to evoke an understanding of Lucia’s emotions. Alongside dance sequences, there are snippets of edited extracts from Lucia’s diaries and letters, providing the audience with brief yet illustrative glimpses into Lucia’s life and mental state. The chosen techniques of dance and carefully crafted extracts steers Horrible Creature away from a straightforward recounting; instead it feels as though we are going through Lucia’s experiences alongside her.

To tell the story of Lucia Joyce’s life through the medium of dance gives us a clearer idea of who Lucia was, the movements manage to fill in the gaps of this important person’s life. The dancing is far more than just dance; it is expression, it is the outpouring of her story. The dance sequences are designed as a dialogue, representing everything Lucia could have possibly been experiencing and wanted to express but couldn’t.

The location choices play a significant role within this depiction of Lucia’s life. Filmed across various locations in Switzerland, the natures scenes that DOP Will Humphris’ capture are breath-taking. Locations chosen include snow-covered Swiss mountains, clear lakes and hillside chapels. To contrast the natural landscapes a school, a hospital and a library room are also featured. These visually arresting landscapes and buildings/rooms add an extra symbolic quality to the dance performances. The locations switch between wide open spaces and confined spaces. Perhaps this could be interpreted to reveal the contrasts in Lucia’s life. The sprawling and open nature scenes represent how expansive Lucia’s career could potentially have been. To contrast this, the confined spaces, such as schools and hospitals, represent a closing in, a lack of freedom, spaces in which she could not express herself through dance. In particular, there is one shot of one of the dancers wedged into a fireplace. The effect of this makes us think of the talented dancer who wanted to achieve equal creative success to her father; yet her confinement to psychiatric care rendered her unable to perform which was suffocating and entrapping.

Horrible Creature manages to bring to life the story of person who has been overshadowed. Not only is a very worthy story being told, it is also being done so with a highly creative vision. Horrible Creature acts as a meditation on how we imagine Lucia would have felt. While the film principally consists of dance sequences, the composed snippets of dialogue provide a revelatory window into Lucia’s life. We are provided with insights from her school days, the friendships of her youth, her family, her love life and her career. What Horrible Creature provides is a stylised interpretation of the emotional experiences which may have underpinned the highs and lows of Lucia’s life. The delicately nuanced yet powerfully visceral choreography ensures that this feature respects and represents Lucia’s life, her struggles and her ambitions. Overall the film relies more so on expression than documentation; it reveals the suffering Lucia must have faced while evocatively and effectively employing dance to paint a picture of Lucia’s mental state.