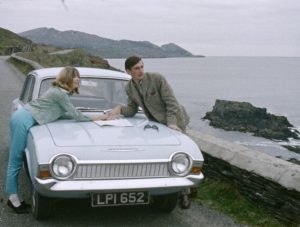 Emma Keyes checks out a programme of Cork-themed films from collections at the IFI Irish Film Archive.

The Cork on Camera programme, put together by the Irish Film Institute, consisted of short films made in and about Cork between, with the earliest from 1902 and the latest from 1978.  The sound section included a short documentary about the sculptor Seamus Murphy, “The Silent Art” from 1959, directed by Louis Marcus, a half-travelogue, half-advertisement commissioned by the DuPont Chemical Company in 1978, “Travels Through Erin”, and a short film directed by Colin Hill in 1972 called “Dark Moon Hollow”. The silent section included three very short films by the Kenyon and Mitchell Film Company from 1902 and an un-finished travelogue, “Car Touring,” directed by Jim Mullerns in 1965. Paul Smith provided improvised piano accompaniment to the silent portion of the program.

“The Silent Art” looks at Cork through the lens of Murphy’s work there. The narration states, “These are people of character in a city of contrasts,” but the twelve-minute film does not much delve into what exactly makes Cork a city of contrasts. Still, the film lingers over Murphy’s work all over Cork, including the Church of Annunciation and sculptures and carvings at University College Cork and the Cork City Hospital. The bells of Shandon Tower serve as a auditory through line as the film returns to them again and again. We get an inside look at Murphy’s studio and Murphy and his young daughter as he works on a bust of her. The film ends with some musings on Cork and art. The film is a worthwhile historical glimpse of a city and one of its storied residents. “The Silent Art” can be viewed on the IFI Player online.

“Travels Through Erin” shows Ireland through the eyes of outsiders. (“Beauty abounds in the land of the leprechaun” is a real line that is said in this short.) The film could be compared to cotton candy for its airy quality and lack of substance, but it was an enjoyable watch nonetheless. More than a film, this piece is an advertisement for the sweaters made out of the acrylic yarn created by the DuPont Chemical Company, but the models are charming and beautiful and they pose in all kinds of picturesque locations around County Cork. Sometimes there’s no need for more.

An elderly man (played by James Dempsey with voiceover narration by Dan Donovan) goes on a journey “walking the River Lee to its source in Gouganne Barra” in “Dark Moon Hollow.” This lovely little film takes its time following this man from one end of County Cork to the other and listening to his musings about life as he goes. As the man says at one point, “London is a long way off from this place.” The bells of Shandon feature again, of course, as one of County Cork’s most distinctive sounds and views. Although mostly in English, the man includes some Irish, some of which he translates and some of which he leaves untranslated: a small prize for those in the know. And Gouganne Barra looks much the same now as it does in the images in this film from 1972.

The three Kenyon and Mitchell films are examples of early “actuality films”. Each short is only a minute or two long and shows Cork City people going about their lives. “Tram Ride from King’s Street to St. Patrick’s Bridge, Cork” and “Views of the Grand Parade, Cork” both show the streetscape, complete with streetcars with open double-decker tops, horses pulling carts, and people of all stripes walking the streets. “Cork Fire Brigade Turning Out” showcases the Cork Fire Brigade as they go through various fire-fighting exercises. These three shorts are entertaining as a small anthropological glimpse into Cork City of more than a century ago.

Finally, the last film in the programme, the unfinished travelogue, “Car Touring” exudes 1960s vibrancy. The clothing, the hairstyles, the cars, the furniture, and just about everything else speak to such a specific historical moment. The unnamed people/characters eat and drink their way around County Cork, seeing Ireland in the way that most people say you should: just driving around and stopping when you feel like it. They kiss the Blarney Stone, they go to Kinsale, they stroll the streets of Cork City. Life unfolds around them in both color and black and white footage. The film match cuts scenes of a young woman driving one car with a young man in the passenger seat with another young woman driving a second car. That film also cuts to various gorgeous shots of the Cork landscape. It’s just a shame this film was never finished, but I found it delightful to watch nonetheless and the piano accompaniment here was particularly good.