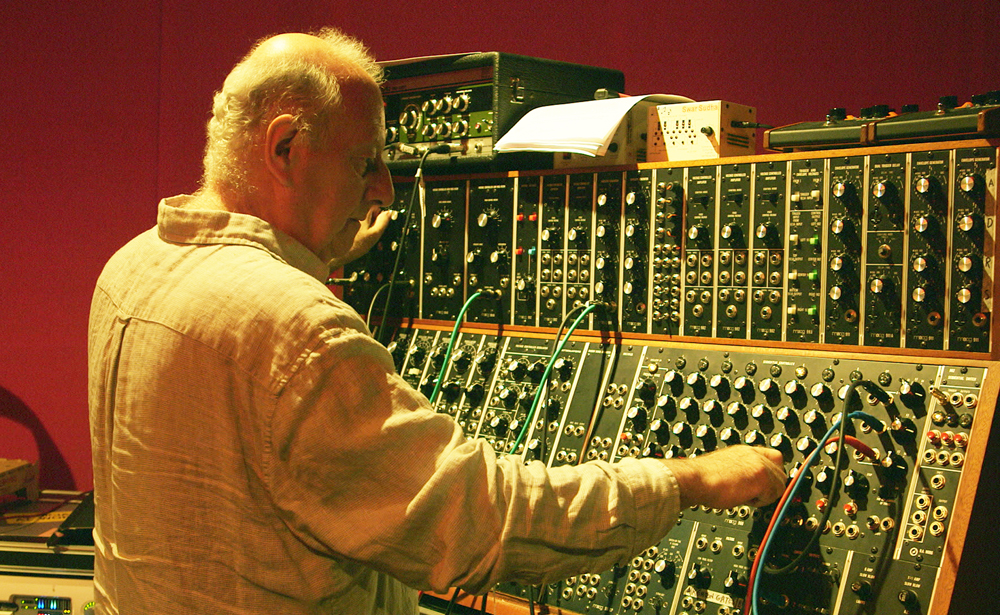 Loretta Goff goes on a journey through The Curious Works of Roger Doyle, Brian Lally’s documentary about Roger Doyle who, over the course of five decades, has created an impressive body of work ranging from minimalist piano and electronic pieces to orchestral works.

Preceding the screening of The Curious Works of Roger Doyle at the 63rd Cork Film Festival, Roger Doyle himself performed live on the piano. Doyle synched this performance with footage of himself in concert in Beijing six years earlier (in 2012), material that was cut from the documentary. As the onscreen Doyle plays, he is superimposed with images of and from a moving train, visually mirroring the motion of his fast-paced music. This synchronicity was echoed through Doyle’s live performance, creating a synergy between the digital and the human, as well as the old and the new—something that pervades both Doyle’s work and Brian Lally’s documentary about the composer.

The Curious Works of Roger Doyle is framed around Doyle’s 2016 electronic opera, “Heresy”, performed at Dublin’s Project Arts Centre, but covers five decades of his career. This intertwining of the current and the previous reflects Doyle’s style as a composer, bringing together classical forms and instruments (e.g. opera and the piano) with electronic technology to create his own style. Interspersed with footage of his opera—from the early stages of its approval and rehearsals to its live performances—are interviews with Doyle’s collaborators over the years, archival footage and several of his past performances. Though dubbed the “Godfather of Irish Electronica”, Doyle’s music has taken him across the world and we see that in the film.

Lally gives space to the music in this documentary, setting aside several sections for Doyle’s performances to play out onscreen. These are often combined with corresponding images that help tell the story of the songs to the audience. For instance, as Doyle plays his song “Chalant” in Paris, shots of the city and its people at night populate the screen. As new faces appear with each beat, a whimsical portrait of the city unfolds. While this shapes our perspective of the song, each musical break in the documentary primarily focuses on the music itself, allowing the audience to become immersed in it and reflect. Doyle’s music invites its listeners to take part in an experience and Lally’s documentary allows for this.

At the same time, we learn about the methods and motives behind the music from both Doyle and his collaborators. Doyle describes the influences behind several of his songs and his use of technology, explaining: “I revise, that’s my process”. Olwen Fouéré, who formed Operating Theatre with him, describes his music as “from the mothership”, noting how their unique styles connected in such a way that allowed them to create musical theatre pieces together for several years.

Equally, several of Ireland’s prominent filmmakers in the 1970s were drawn to Doyle’s music. In fact, Bob Quinn, who collaborated with Doyle several times, also used the composer as a subject of a 1978 documentary for RTÉ. Joe Comerford, who grew up with Doyle, explains that they worked in parallel on the short experimental film Emptigon, simultaneously developing a language of film and composition. A similar sentiment is expressed by Cathal Black, who explains that music creates “a sort of invisible story” in film and Doyle’s was able to perfectly match the film’s narrative in Pigs.

In Lally’s impressive documentary, the story of the music is much more visible and, during the Q&A following the screening, the director expressed that, though he did most of the work on the film, he had Windmill Lane work on the sound mix as that was “quite important” for this project. Equally it was Doyle’s music that inspired the project. Lally became aware of Doyle’s work in the early 1990s but started the documentary in 2005 when he saw Doyle playing goldfish bowls at Whelan’s in Dublin and thought: “this is remarkable, someone should be filming this.”

Describing Doyle as an “avant-garde” composer, Lally explained: “the more I delved into it, the more fascinated I became”, noting that, particularly when he struggled to find funding for the project, “there were certainly points when the music kept me going.” Screen Ireland funding eventually saw the documentary through to completion and the result is a thoughtful exploration of Roger Doyle’s music and career. As Doyle expressed in the Q&A: “I am constantly curious and constantly looking for new ways of doing things.” The Curious Works of Roger Doyle expresses just that, bringing the audience along for the journey.

The Curious Works of Roger Doyle screened on Sunday, 11th November 2018 as part of the Cork Film Festival (9 – 18 November)