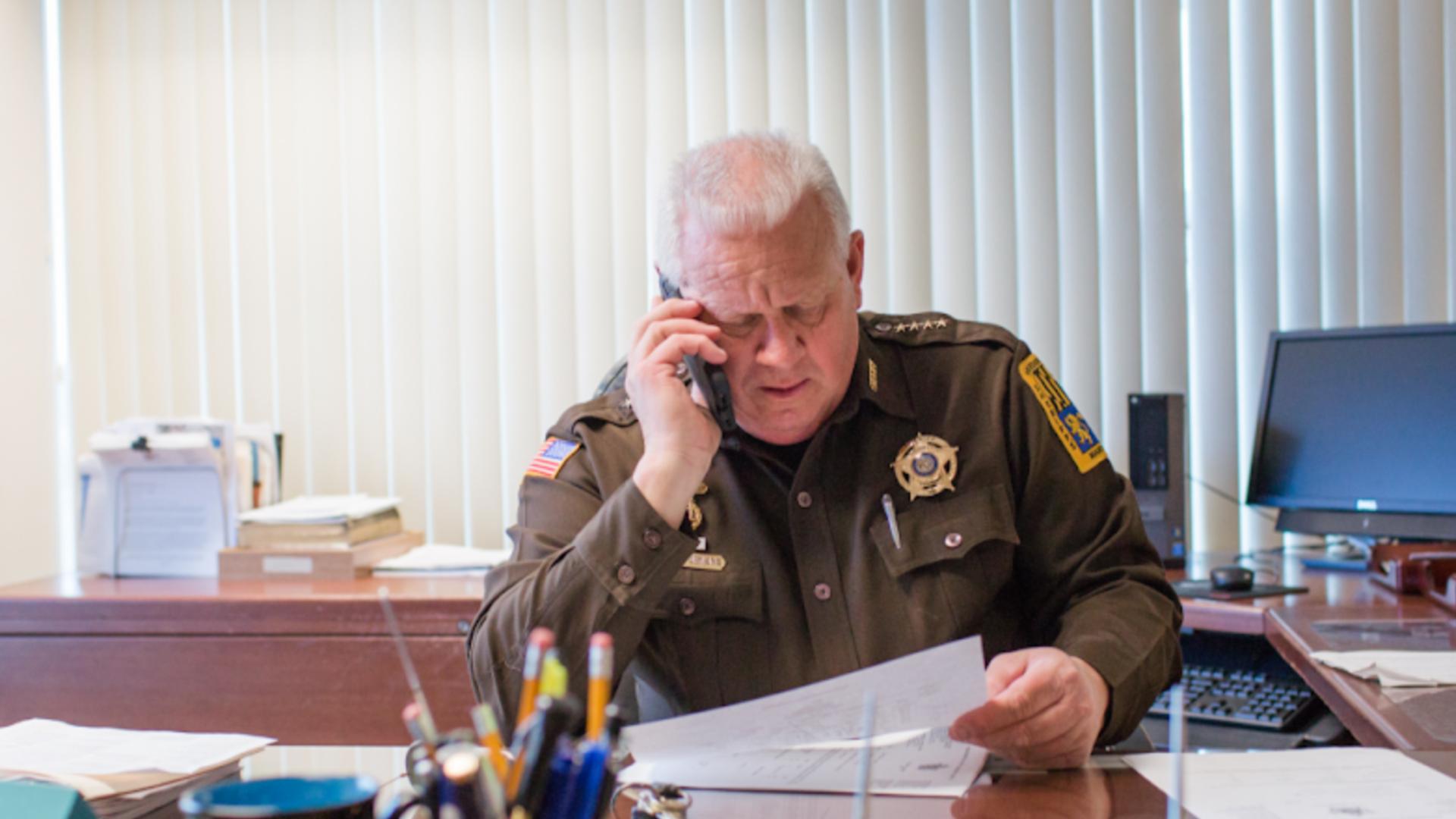 Loretta Goff takes on The Sheriff, Grace Sweeney’s film which follows two candidates competing to be elected for this prolific role in two contrasting territories.

With her directorial debut, The Sheriff, Grace Sweeney neatly distils the often overwhelming topic of divisive contemporary politics in the United States by following the election campaigns of sheriffs in two counties during the midterm elections in 2018. These local politics mirror the national, acting as a neatly contained arena to investigate the broader political issues facing the country, including the increasing polarisation of views, rural and urban divide, systemic racism, and immigration. It is apt that this documentary hit the festival circuit in 2020 when these politics once again took centre stage during the US presidential election, allowing viewers a closer look at how these play out at all levels.

The documentary follows three candidates for sheriff. Chuck Jenkins is the incumbent Republican Sheriff in Frederick County, Maryland, running for his fourth term in the role. Jenkins is known for his hard-line stance on immigration, which has seen him feature in national news, be named one of America’s toughest sheriffs, and meet with President Trump at the White House. In contrast to this, his opposing candidate, who has also run against him three prior times, Democrat Karl Bickel, takes an approach that is welcoming of diversity, noting that he will not work with ICE as Jenkins does, and will instead focus on tackling the ongoing opioid crisis. Meanwhile, in Durham County, North Carolina we meet Democrat Clarence Birkhead, who would be the first African-American sheriff for the county if elected. We never see his opponent, instead focusing on the work Birkhead will need to do to change the image of the Sheriff’s office in the community from one of fear and unapproachability to one that works for the people.

We get to know the candidates through interviews with them, scenes of them going about their campaigns, and interacting with members of their communities and families, which, importantly, reminds us that, at the end of the day, they are all people, rather than simply symbols of their parties and key political stances. Interspersed with these are interviews with professors and journalists, along with current and historic news clips that serve to paint a clearer picture of the role of the sheriff and the divisive political climate in a transitional period in America as traditional methods clash with modern socio-political issues. As his previously large lead over Birkel drastically shrinks in the 2018 election, Jenkins himself reflects on this clash, noting “I haven’t changed, the times have changed, I guess.” The role of the sheriff, mythologised as the law and order man taming the wild west, has long been associated with this type of tradition, but this is no longer always fit for purpose.

Politics are pervasive in the US during election years, illustrated throughout the documentary with the sheer number of political signs that overwhelm the landscape. The polarisation of Democrats and Republicans are clear, and is spoken to throughout, but particularly interesting in this film are some of the similarities that become evident amidst the many differences of both sides – both feel the other would not be comfortable or fit in in their community, and both are convinced the other is stealing their signs. Jenkins and his friends consider Bickel “academic” and “elitist”, and Bickel feels Jenkins would not be comfortable in an urban, multicultural environment, stopping just short of calling him racist. This subtly highlights the fact that, buried underneath all of the politics that often seem to feed on fear and become bound up in opposing stances, we need to find ways to communicate and understand one another, and our similarities, as people in order to find a way forward to a better future.

The Sheriff smoothly navigates through clashing politics, social issues, and perspectives to paint a portrait of a diverse America caught between tradition and modernity. Sweeney captures poignant moments, hopeful and frightening, and reminds us that at the heart of it all are people. A well-crafted and interesting documentary, The Sheriff, is a strong debut from the director.