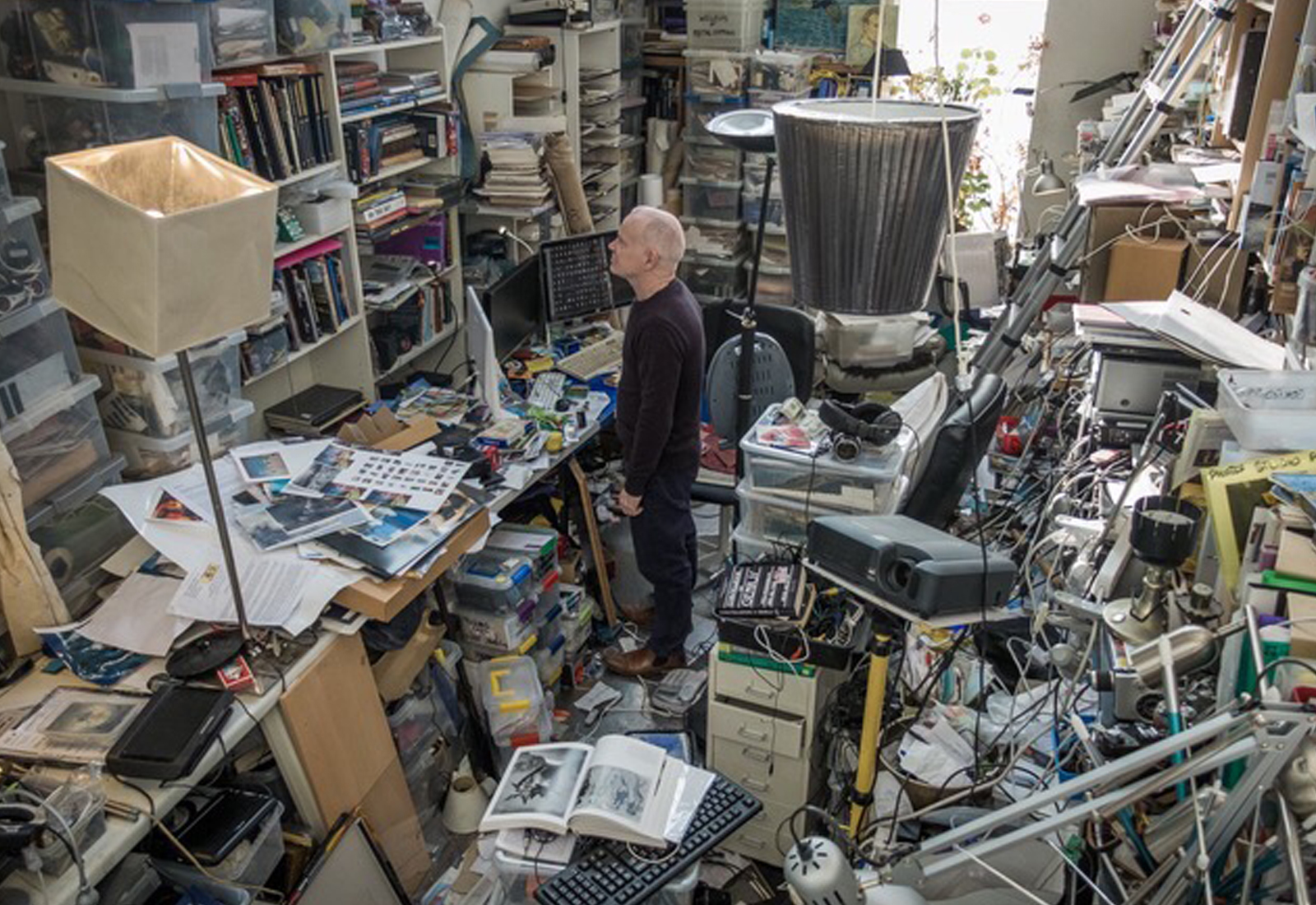 June Butler sorts through Gillian Marsh & Gretta Ohle’s Tomorrow is Saturday, an intimate portrait of the life and work of Irish collage artist Sean Hillen, as he sets out to to declutter and make sense of his life.

Artist Sean HIllen was born in 1961, the second youngest of five children. He grew up in Newry Northern Ireland, and went on to study at Belfast College of Art, London College of Printing, and the Slade School of Fine Art. Hillen is a collage artist and has wrought clever, ethical images that provoke, instruct, and teach. A poet and witty analyst, his artworks are full of whimsy and pithy foresight. There is an element of modern seer about Sean – he is unapologetic in the work he brings to light and ceaselessly toils to enlighten and inform.

From the onset, his parents noticed that he was unlike his siblings. A brother tells of how they would play with a toy while Sean took the same plaything apart to see how it worked and observe inner movements. Hillen is disarmingly honest about his early years and the ways in which he studies the mechanisms of existence – nothing is off limits. It is a delight to observe Hillen’s unfettered joy make its way through the machinations of serendipity. Hillen sees portend in everything – he wholeheartedly believes in UFOs and other-world manifestations.  One scene witnesses him placing a table just outside the front door of his home and photographing clouds – in each wispy gathering of cumulus, Hillen points out shapes – a horseshoe in one, a facial image in another. Complex patterns are simply a spin on a different language albeit one that Hillen has mastered completely.

Sean HIllen presently lives and works in Dublin, where his abode is a tiny terraced house filled to the brim with musings and creativity. He comments on his kitchen, which he says is built like a galley and goes on to say ruefully that, in effect ,the bank owns his living quarters. Financial issues play on his mind and he tells the story of how the bank once sued him for monies he had borrowed against an income from the Photography Archive at the Imperial War Museum in London, funds that never materialised. He says that this lack of income became an acme of utter humiliation and he wept after finding himself in such dire straits.

Inside his home, Hillen has what he terms as a ‘shrine’ to Amazing Amy, an American lady he encountered online. Amy was looking for companionship as was Sean. Together they found each other. They speak regularly and when the Covid19 worldwide lockdown occurred, Amy had just arrived to visit and was unable to return to the U.S. The result is a tender image of Amy and Sean sitting side by side, working on their individual art pieces. Hillen announces he is going to make Amy a cup of coffee. In this touching moment, the stuff of simplicity, it is clear that Sean loves Amy and she him.

Hillen makes much of his late-life diagnosis of Asperger syndrome. He narrates the story of ringing his friend Greg Dunn to speak with him and chatting to Dunn’s daughter. As she put down the phone, he heard her asking her father if he thought he, Sean, had Asbergers. Hillen recalls the news hitting him hard – he knew that he did not view the world as others did but had never delved into the reasons why – suddenly things started to make sense. He relates how people with this condition can drink to excess and are inclined towards hoarding. Hillen maintains that he is attuned to seeing uses for items that many consider worthless. He cites a broken lock as an example. For him, the damaged lock represents something inextricably sad. But just as he sees beauty in objects otherwise deemed to be without value, Sean also feels that this facet of his perspective can hold him back and prevent him from being truly productive. Hillen says that he often feels overwhelmed and without purpose. Chaos is his enemy, structure his friend. It is a double-edged sword however – deprived of the disorder, he would not be compelled to rein in the disarray that surrounds him and without that, the joy of rediscovering lost gems, could be lost in the debris. Sean is at times upbeat about his condition, and at others, depressed and down-hearted. He maintains that he makes good pictures but has failed to make a living at it. It seems that among the gnarled threads of his take on the world, Hillen can at times, see no positives.

Arbitrarily omnipresent in the moment, Hillen’s images are filled to the brim with humour, and at times, excoriatingly brutal honesty. He speaks of the background to one picture where he photographed a march in Newry. During this era, no one was allowed to take photographs of the security forces in any capacity. Hillen clandestinely captures some images but cuts out and places a line drawing of one, Sister Maria Faustina Kowalski, now canonized, over the montage of the policemen. He captions the collage as Sr. Faustina Appears in London-Newry Miraculously Preventing the Illegal Photography of Members of the Security Forces. There is no doubt that Hillen is making an unambiguous political comment yet the artistic statements he makes, retain an all-pervasive impartiality. From one picture exposing the tail of a humpback whale flicking dangerously in the direction of a small boat in the Liffey to an image of soldiers and activists juxtaposed against images of utter incongruity – it is impossible not to see the humour in everything Hillen creates. Hillen is Banksy before the world ever knew Banksy existed. He is the original of the species in every way. Unfailingly good-natured and undoubtedly talented, Sean is a shining example of tenacity and skill that is close to genius. The world is a better place with Sean Hillen in it.

Tomorrow is Saturday screened as part of the Galway Film Fleadh 2020 (7-12 July).