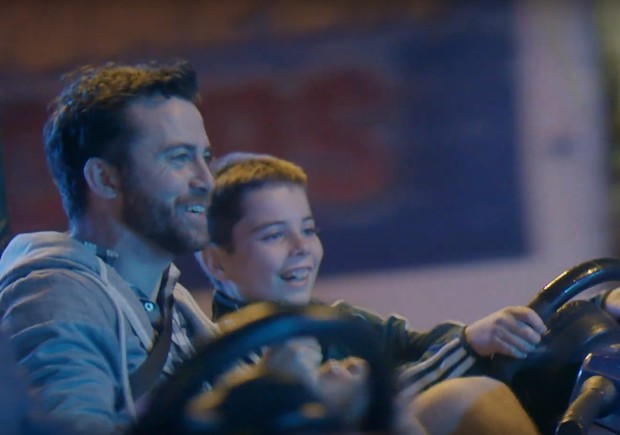 This year for the first time the Galway Film Fleadh went online. All films and short programmes were available to rent from the festival website and viewers were given 24-36 hours to watch their selected films before they expired. Although the festival organisers might have been disappointed that the festival could not be held live in Galway this year, it was a great opportunity to move the festival forward into the digital age of cinema viewing.

The first film I got to view as part of the Fleadh was writer/director Dave Minogue’s Poster Boys. The story follows the unlikely pairing of Al and his nephew Karl as they try to survive a week in each other’s company.

Al, struggling ‘to adult’ in general, is going through a week. He is not doing well in his job as, you guessed it, a Poster Boy! He is unable to pay his rent on time and his love life is an absolute shambles. Meanwhile, his sister wins a holiday on the Joe Duffy radio show and manipulates a distracted Al into minding his nephew for the week.

After a horrendous start, Al’s incredibly smart nephew (played by Ryan Minogue-Lee), takes charge of his career. The two end up in a camper van embarking on an All-Ireland postering tour of the country in order to save Al’s life. Minogue-Lee gives an outstanding performance as Karl, and it is hard to believe that the two leads are not uncle and nephew in real life.

Incredibly dark humoured and funny throughout, the viewer is rooting for the two poster boys  throughout the film. Great acting from the ensemble cast of this rather dysfunctional and true to life, Irish family.

The film leaves us with a rather uplifting message; that families need to look out for each other no matter what circumstances they find themselves in. This film is an Irish gem that will have you in stitches. Especially now with pandemics and lock-downs, when we need to stay positive and to enjoy the little things in life. A great escapist movie that packs a punch.