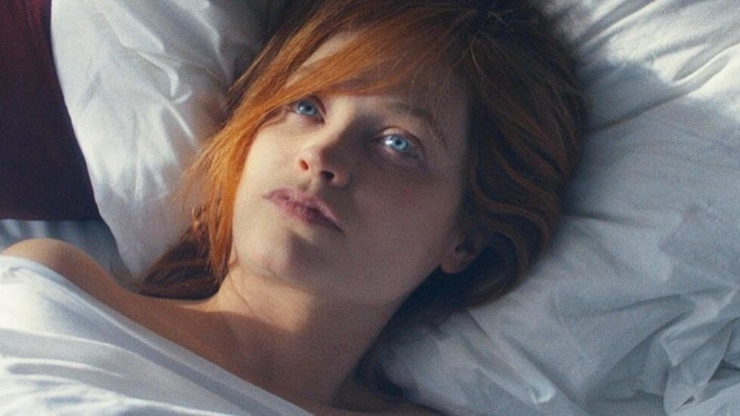 June Butler sees the wood for the trees at the Galway Film Fleadh shorts programme which focuses on facing the truth – for better or worse.

Kathleen Was Here is a beautifully depicted and narrated short film by fledgling director Eva Birthistle. Birthistle has mastered a poignant and emotional tale of an 18 year old girl who finds herself alone after a series of personal tragedies. Played to perfection by Hazel Doupe, young Kathleen is rendered bereft by a suite of heart-breaking calamities. Reaching the age of majority leads to enforced adulthood and means that, according to the system, Kathleen is considered no longer in need of social assistance. Abject distress etched across Kathleen’s face clearly suggests the opposite. Toni O Rourke as Kathleen’s mother, Carol, provides some insight into how Kathleen’s formative years evolved and suggests that the disastrous unfolding was inevitable.

In the short film Expulsion, director Sinead Murphy gathers together a series of horrific memories linked to childhood abuse. The protagonist is played with artful guile by Kelly Thornton as Sandy, a young woman haunted by flashbacks involving formative years spent in state care and a priest connected to the same orphanage. The expectation of short films is that lead characters are instantly identified and there is a minute lead-in to the basis of the story. In this, Sinead Murphy succeeds with aplomb. From beginning to end, the film is steeped with tension and there are moments when Murphy literally startled the bejaysus out of me. Just when I started to recover, the bejaysus-provoking scare-tactics went into overdrive and my senses were assailed again and again. But in deference to Sinead Murphy, if she intended on showcasing a wall-climbing visual aspect of horror, she certainly succeeded in her efforts.

Expulsion is a fine short film and provides an apt platform for Murphy’s directing skills.

Director Fiach Kunz has crafted a powerful film on psychological divisions between love and hate, loyalty and indifference. There are multiple layers to Barriers. The story centres on an adult son, Martin Boylan (Fiach Kunz), living with his bed-ridden disabled father, Christie (Tom Singleton), in a home that has seen better days. A community nurse, Orla (Lisa Tyrell), tends to Christie’s needs of care and calls to the house to check on him. Martin lovingly observes Orla from a doorway and she confronts him about his actions. Christie is unable to communicate and is frustrated with his shortcomings. Martin cannot find the words to tell Orla how he feels. Orla in turn is only able to voice her feelings not through words but by singing to Christie. David (Michael McLoughlin), Orla’s partner, is consumed by emotion for Orla but cannot convey love and is overcome with rage and a sense of self-destruction.

The short film has many tangents but the main thrust is the need to communicate and the inability to do so – by breaking down, in effect, the ‘barriers’ of the title, director Fiach Kunz has made an imposing comment on finding freedom through self-expression.

English director Arjun Rose has presented a tender yet heart-breaking story of the moment when life events conspire in forcing decisions with catastrophic and tragic consequences. Sadhbh tells the story of Claire (Laura Whitmore), a young mother taking care of her newborn baby, the eponymous Sadhbh of the film title. As Claire leaves her home with the child in a pram, she crosses the road and is almost hit by a car. The driver yells invectives at her but Claire barely appears to notice. A postwoman, Jean (Pearl Jarrett), intervenes and gently guides Claire back to her house. Whilst in the house, Jean tries to make Claire a cup of tea but cannot because there is no milk in the fridge. The house is in disarray yet Claire appears oblivious and it soon becomes evident that there is more to Claire’s story than meets the eye. Jean tactfully withdraws from the house and Claire’s boyfriend enters the narrative.

Director Arjun Rose faces down an oft untold narrative – one that can have a calamitous effect on multiple generations. Rose imbues the tale with sensitivity and compassion, but above all, commits to an honest depiction of tragedy and loss yet does so without passing judgement.

The Lucky Man is a hilarious story of a hapless bartender who thinks he has hit the jackpot when a beautiful woman dressed as a bride enters his bar and asks him to dance. Terry (Gary Lydon) runs a local pub when Ursula (Laoisa Sexton) appears almost miraculously after apparently ditching her husband-to-be at the altar. Terry is dumbfounded as Ursula makes increasing requests for Pringles and loudly criticises him when he confesses there are none to be had. She then goes on to garrulously demand a dance (with Terry), complains about the lack of music and finishes up by insisting he acquire a bottle of champagne for her to drink. Two barflies, Eileen (Eleanor Methven) and Griffith (Brendan Conroy) have passed out from the excesses of alcohol and are asleep with their heads resting on the counter. At separate stages they awaken, gawk at Ursula, query why she is there, and fall back into comatose before the question is answered. The entire episode is hugely entertaining and touchingly sentimental in equal measure. The question remains as to who the ‘lucky man’ is – Terry or Ursula’s jilted husband.

Laoisa Sexton is an exceptionally gifted storyteller and actor. The success of the entire film depended on the character of Ursula and Sexton has rendered her both vulnerable and sympathetic.

Dónall Ó Héalaí, plays Barry O’Dwyer, the lead role of Danny McCafferty’s short film Tyre Kickers. Barry and his father (David Murray, known simply as ‘dad’ throughout the film), embark on a road trip to find a vintage car from their past. The narrative focuses mainly on interaction between father and son as Barry drives along winding country roads. Barry’s task is to supply taciturn, monosyllabic responses to his father. Dad’s function is to find fault with everything his son does. The duo bicker and banter, back and forward, as they extoll the virtues of the car they want to track down. For the most part, Barry seems wrapped in his own thoughts and hardly interested in what his father has to say. It is clear there is an unacknowledged emotional history between the two that has made it difficult for each party to appear vulnerable to the other. The relationship is tense and neither are willing to traverse the divide. However, things are not entirely as they initially seem.

This short film is centred on masculinity in crisis. Female roles are side-lined and the stilted narrative links a breakdown in communication concerning father and son. It remains to be seen if Barry’s actions at the latter stage of McCafferty’s film fully resolve the predicament. A masterful but tense direction from McCafferty denotes Tyre Kickers and its director and writer as ones to watch.

Ascending Grace is an immensely funny film with touches of a ‘Fr Ted’ style of humour from writer and actor Karen Healy. Director Claire Byrne supports Healy’s expert writing by combining her own expertise in bringing to the fore a rapidly-paced and stylishly presented short film. Karen Healy plays the role of Maedhbh, a marginally irritating, peppy fledgling pilot on her maiden trip. Maedhbh tries to verbally engage with truculent veteran pilot Cara (Norma Sheahan) but is rebuffed at every opportunity. Jade Jordan comes into the fray as Sarah, an air hostess desperately trying to stave off a passenger mutiny with wind and rain battering the aircraft, delaying the flight from take-off for hours.

The three characters embody a perfect trinity with each acting as a foil for the other. Sarah’s eulogy on Ascending Grace is one of the wittiest scenes I have seen in a while – the characters are fully evolved and strongly defined.

Director Claire Byrne, along with writer Karen Healy, are forces to be reckoned with.

Review of Irish Film at Galway 2020