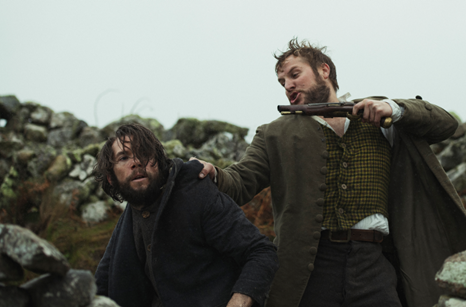 Fionn Warren washes up on the wild shores of Connemara in 1845 at the screening of Arracht at the 2020 Dublin International Film Festival.

Set in Connemara in 1845, Arracht (‘Monster’) tells the story of a man’s struggle for sanity and survival during the Great Famine. Told in the Irish language, the film follows Cólman Sharkey (Dónall Ó Healaí) who, at the request of the parish priest, takes a stranger (Dara Devaney) into his home. After a visit to the home of the local English landlord (Michael McElhatton), personal tragedy and despair follow Cólman but hope returns in his looking after a young sick girl.

Tom Sullivan’s fiercely impressive feature debut is a character-driven thriller that explores grief and despair during one of Ireland’s most infamous hardships. However, Sullivan’s desire “to show how it felt” opposed to “what it looked like” means there are no shots of starving crowds, famine ships, or mass evictions that one might expect to find in such a film. Instead, the story of the famine is explored through the suffering and ordeals of Sharkey. A respected leader in the community and a caring father and husband, Cólman’s world is shattered with the arrival of the potato blight. It is through his agony that we witness the horrors of the period and through his resolve that we get a sense of the determination of the human spirit.

Ó Healaí is brilliant as Sharkey, going between the strong leader and grief-stricken outcast with believability and balance. I found the scenes between Sharkey and Kitty (Saise Ní Chuinn) compelling and the relationship which develops between the two adds a sense of warmth and humanity to the film. McElhatton also does a particularly convincing job of portraying the English landlord as both odious yet human.

There is also a real feeling of authenticity to Arracht. In an age where people have grown reliant on the potato crop, Sharkey has retained the skills to fish and has followed in the family tradition of distilling Poitín. It is a very physical performance from Ó Healaí, encapsulated by his underfed body when living in the cave. We also see the characters take part in wall building, old fish-smoking techniques, and traditional medicine making. Coupled with the Connemara dialect of Irish, these details make the film a completely immersive experience.

However, I found the greatest achievement of Arracht to be its ability to create atmosphere and Sullivan’s film can feel at once foreboding and hopeful. The barren grey landscape adds to the bleak atmosphere and gives an apocalyptic feel to the film, yet there is a beauty to it. The sound design is also excellent, the harsh Connemara wind and waves are a constant presence in the ear of the viewer. For Sullivan, the Great Famine was an event that “make[s] up our collective national DNA,” in Arracht we are brought closer to a period in history that continues to define what it means to be Irish today.

Arracht screened on 28th February as part of the 2020 Dublin International Film Festival.