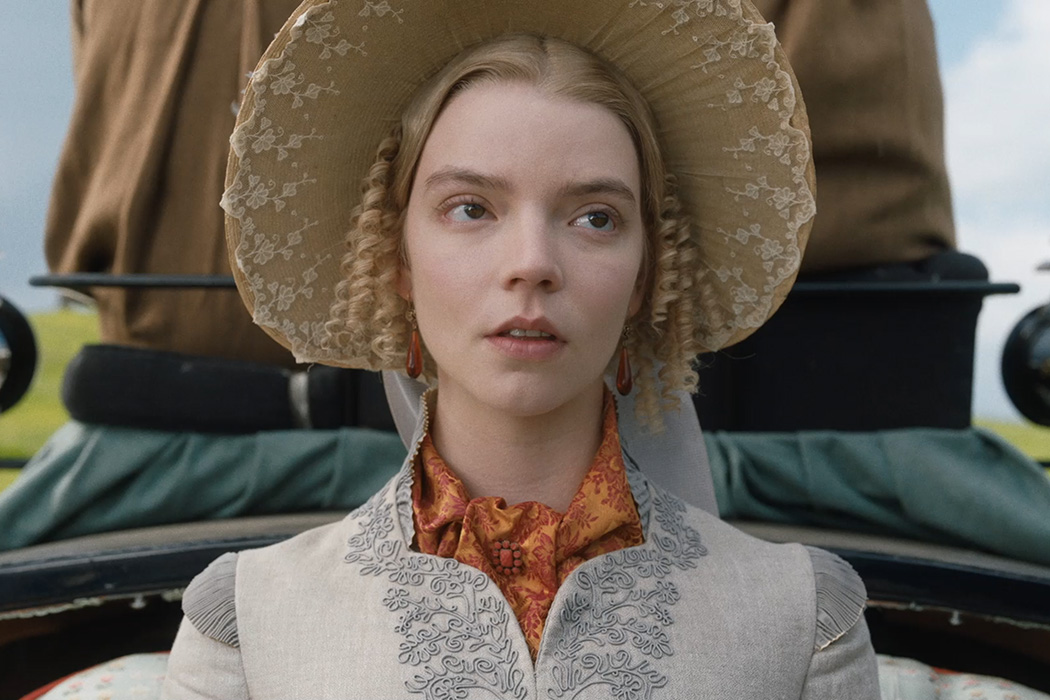 My first introduction to Jane Austen was BBC’s TV adaptation of Pride and Prejudice, you know, the version when Colin Firth comes out of a lake dripping wet? Yep, that one. Ever since I’ve had an interest in screen adaptations of Austen’s works. The Keira Knightley version never holds up to what the BBC created in 1995; however, I know many people who disagree with that opinion. But that’s the joy of Austen, her work is so beloved, and always manages to stand the test of time, that people will always continue to make adaptations of her writing; there are so many versions of her work that most will find one that they always go back to. Much like Pride and Prejudice, Emma too has multiple on-screen adaptations: there’s the one with Gwyneth Paltrow in 1996, Kate Beckinsale plays Emma in another filmic version in the same year, and the 2009 BBC version; then of course you have more modern takings like Clueless. Now, in 2020, another addition is added to the screen canon – Autumn de Wilde’s Emma, which, looking at her IMDB appears to be her first feature-length film as a director, being best known for her directorial work on music videos for the likes of Florence and the Machine. For her first major cinematic release this is a hell of a debut.

What immediately stands out with this film is its frivolity and flamboyance; this is portrayed through the comedic tone, the cinematography, the score, the colour, the sets, the costumes, the acting… everything comes together perfectly to create probably one of the funniest and memorable versions of Emma I’ve seen. It has an air of the same oddness that Yorgos Lanthimos’ The Favourite contained. Anya Taylor-Joy brings a great arrogance and superiority to the character of Emma that I feel wasn’t quite captured in some previous adaptations; her belief that she is right in all things, particularly in the field of meddling in other people’s love lives, was very well portrayed in Taylor-Joy’s take. Emma’s ‘teaching’ of her friend Harriet Smith (Mia Goth) to marry a man higher than her station in life is unfortunately misguided, and lends toward much heartache for her friend, and herself. Yet the fact that Emma believes women should be able to marry whomever they want, regardless of class, is what makes her a heroine that can be appreciated today.

The chemistry between Anya Taylor-Joy and Johnny Flynn, who played Mr. Knightley, Emma’s long-time friend, was on point. There was an equality and realism to their conversations, the comfort with which both could express their views (mostly opposing) to each other was refreshing to watch, it didn’t feel contrived or staged; therefore making the fact that they are, in fact, in love more believable. I particularly liked Flynn’s Mr. Knightley because, although Knightley is a gentleman, Flynn gives him a humanness that, at times, is laughable. One scene shows him throwing his coat and flinging himself to the floor in exasperation. The entire cast of this film embody their characters perfectly, allowing for the creation of an endearing comedy. Bill Nighy as Emma’s father is hilarious, bringing his typical calming demeanour to a character that worries too much. Miranda Hart was the best choice for the rambling Ms. Bates, while Josh O’ Connor was great at capturing the cringe-worthy Mr. Elton. Also, it’s hard not to notice a few of the cast from Netflix’s Sex Education popping up in the film.

The pastel colours of the sets and costumes make the film aesthetically enjoyable to watch, with the score complementing the light air of the entire movie. I generally find that when a film is advertised specifically as a comedy it’s never as funny as I expect, but de Wilde’s Emma is charming in its easy humour, and original approach to the well-known text. The somewhat modern feel given to this film will hopefully encourage a younger generation to gain an interest in Jane Austen.

De Wilde’s Emma is a great addition to onscreen renditions of Austen’s texts, and can stand proudly among the best of them.