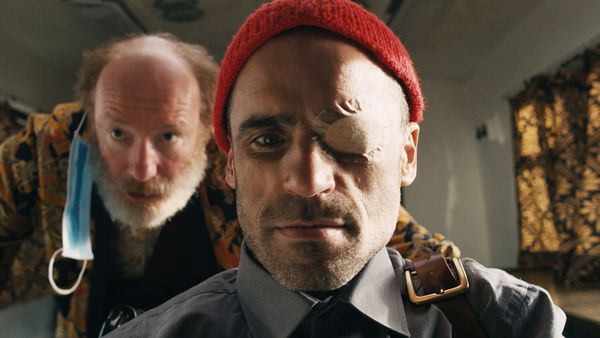 Siomha McQuinn reflects on Dathai Keane’s offbeat, mysterious, fantasy drama Finky, which is the first film to emerge from the Cine4 scheme.

Dathai Keane’s Irish language feature, Finky, was warmly received at its world premiere at the Galway Film Fleadh. Set between Galway and Glasgow, the ambitious, arty and action-packed film was brought home for its debut outing. This fever-dream of a film follows Micí Finky, a musician who is haunted by a dark past leading him to look for an escape. He finds himself in increasingly off-the-wall and dangerous situations which ultimately force him to confront his past once and for all.

Finky is a celebration of the Irish language. It catapults the language onto an exciting new terrain, far beyond the traditions of Irish-language filmmaking.

A puppet show opens the film and this whimsical and unconventional beginning sets the tone for the rest of the film. It is made up of a series of sequences which defy expectations at every turn, leaving the audience clueless about what will happen next.

After a bust-up in Galway, Finky flees to Glasgow with his friend Tom where, after meeting an eclectic mix of characters, he is involved in an accident and becomes wheelchair bound. He seeks refuge in his state of reduced mobility but is not safe from his own memories. In an act of recklessness he finds himself recruited by a sinister circus which causes things to go from bad to worse in a spectacular final sequence.

The film originated as a character study and this is wholly apparent as it devotes itself to Finky’s viewpoint above all others. At times he is not likable and loses the empathy of the audience with his actions. It is a challenging character and is performed well by Dara Devaney. The erratic nature of Finky’s personality is mirrored in the events of the film.

In addition to Finky, the film has a wide range of colourful characters who bring different energies to the screen. The character of Bang Bang, played by the film’s co-writer Diarmuid De Faoite, provides comic relief with his eccentricities. His character is one of the contributors to the tone of the film shifting frequently; one moment it seems to demand that it is taken seriously while at other times it is farcical and surreal in nature.

The sensory experience of the film is enhanced with the use of a strong soundtrack. Dreamy, melodic pieces accompany the beautifully shot frames. Above all else, the film creates mood effectively. The visuals provide a dream-like quality to modern-day Galway and Glasgow.

Overall, Finky is a well-acted, engaging and memorable film. It could have benefited from a less complicated structure as it was at times confusing, however, it is sure to be a provocative film.