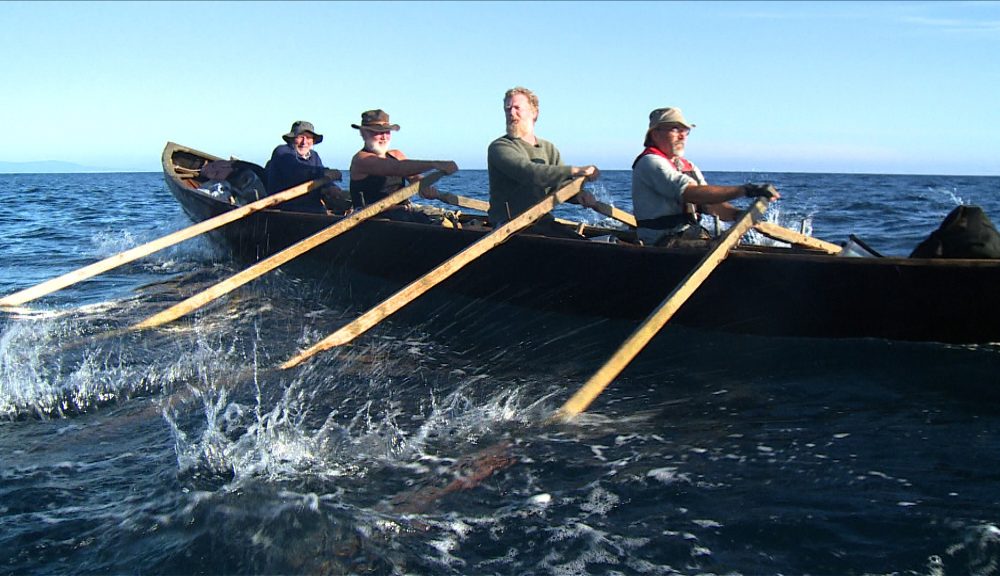 Their ancestors sailed to Coruña in Northern Spain, and walked the Camino to Santiago de Compostela from there. These men did the same, sailing in their ‘Naomhóg’, a traditional West Kerry rowing Curragh/boat. Neither young nor hardened men of the sea, they were writers, musicians and artists. This pilgrimage was an ode to their kindred predecessors. En route, they had to traverse rocky coast line, cross seas and work up rivers all for the hope that they can complete the journey. To do what these men did, all in a Naomhóg built by their own hands, would be thought impossible, but this group of artists  showed true passion for the beyond-demanding journey. Not only this, but it was all done with a smile.

As Danny says of the sweat, blood and blisters journey, “People might say we’re out of our minds… you need some of that because  if you’re sensible all the time – sure you’d do nothing.”

While the “crazy” journey is the subject of the film, it is the people who are its heart. The crew – who are joined by Glen Hansard along the way – are an infectious manifestation of courage and conviction with a true grá for adventure. This feature  documents this pilgrimage skillfully and tracks their battles they face along the way. These men saw the impossible as improbable and made the improbable doable. Their message is clear: no matter who you are or the road you’ve travelled, if you decide to do a 2,500km journey in a rowing boat then why don’t you?

Sadly, as Danny continued this Naomhóg journey south in 2017, he tragically lost his life when the Naomhóg overturned. A truly wonderfully inspiring man, whom this beautiful film is a testament  to.