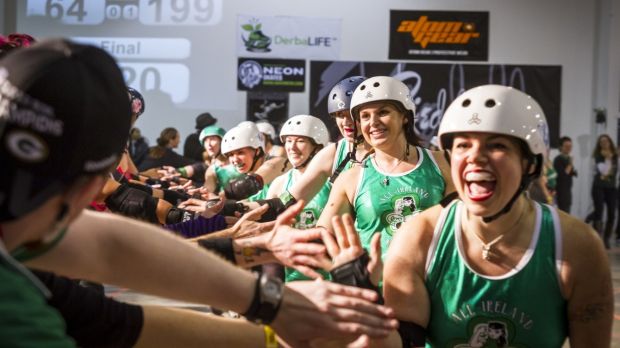 I have a huge soft spot for films which probe niche professions, societies or communities. There is something amazing about entering into a movie knowing very little about a world and leaving feeling like one has been clued in to the everyday goings on of the people involved in a unique lifestyle. If anyone reading this is like me, Laura McGann’s documentary Revolutions is a must.

Focusing on female roller derby – a sport rarely depicted in cinema (aside from Drew Barrymore’s excellent but underseen coming-of-age drama Whip It) – the film centres upon the players who brought the game to Ireland. We follow the lives of members of the Cork City Firebirds and the Dublin Roller Girls. The two squads engage in a fierce rivalry, one made even worse by the fact they had to play together representing their country in the Roller Derby World Cup.

Part sports movie, part character study – the doc delivers exciting action scenes of the women playing the game, interpersed with fascinating vignettes regarding the personal lives of the players. Laura McGann wisely lets her subjects tell their stories and they don’t let her down. Players like the feisty Crow Jane are so candid in interviews, discussing openly the impact of the recession on her employment status, the refuge she found in the roller derby community and how her competitive nature ultimately led to a lot of strife.

It’s also amazing that many of McGann’s true-life subjects feel already like heightened fictional sports drama characters. Crow Jane – every scene appearing with a new and amazing radical hair-cut (McGann shot the movie over five years), screaming profanities at the referee and opposing managers – is a joy to follow.

Although Jane steals the movie, Dublin Roller Girls, and eventual Ireland manager, Violent Bob, gives her a run for her money. He wins hearts as someone talented but somewhat crippled with self-doubt over his inexperience in the sport, the transition between semi-professional coaching to world competitor proving too much. He is also lovingly the antithesis of his sports name, something evident early on when he tells the cameraman that when he sees his romantic partner and team player get tackled – he just wants to leap onto the pitch to see if she is alright.

However, one can understand his concern because the game seems surprisingly full-on in regards physicality. The verisimility with which McGann shoots the derby matches – ones in which players collide constantly at high speeds, often using their heads to block – leaves the viewer feeling every hit.

Like many of its subjects, Revolutions is fierce, lovable and scrappy. It’s also clear that everyone involved in the making of the doc is passionate about roller derby. The feeling is infectious.