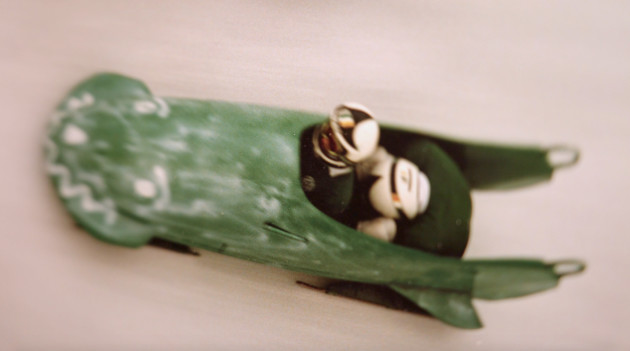 Seán Crosson gets into the grooves of Breaking Ice, the story of the first Irish bobsleigh team to take part in the Olympics.

The sport documentary has grown in importance over the past twenty years – in line with the increased presence of sport across most media platforms. While there is certainly a huge range of relevant material now available, many productions can be of limited quality, relying excessively on viewer’s interest and curiosity in archive footage of their favourite team or athlete.

One of the most popular recent examples was the ESPN series “The Last Dance” that combined largely unseen footage of Michael Jordan and the Chicago Bears in their prime, with broadcasts of classic moments and contemporary interviews with the major figures involved with the team and media.

In the Irish context, for understandable reasons given the widespread interest in sport in this country, filmmakers have increasingly turned to sporting subjects in their work with recent prominent examples including Laura McGann’s Revolutions (2017) which followed and examined female roller derby teams in Ireland, and Ross Whitaker’s profile of boxing champion Katie Taylor, Katie (2018). Both these documentaries featured contemporary athletes who were breaking new ground for the sports they compete in, particularly in Ireland. Breaking Ice also focuses on Irish pioneers for their sport, the individuals who led efforts to enter the first Irish team in the winter Olympics. Led by Larry Tracy, the team succeeded in entering an Irish Bobsleigh team in the 1992 winter Olympics and they inspired many subsequent Irish athletes that an Irish team in the winter Olympics was a real possibility.

Though referred to in the documentary itself, this film is far removed from the celebrated fiction release Cool Runnings (1992) which was inspired by the Jamaican bobsleigh entry to the 1988 winter Olympics. Unfortunately, it would appear from the documentary that very limited relevant archive survives from the period. The documentary provides its own commentary on the absence of contemporaneous footage; the apparently archive news reports returned to throughout are ultimately revealed to be more recently recorded and contain their own critique of the failure of the Irish media to provide adequate coverage of the sporting endeavours of the athletes featured.

The documentary therefore relies heavily on talking heads interviews and personal video footage of varying quality (in both image and sound) from the main individuals involved with the Irish team – this limits considerably the overall impact and achievement of the production. Animated sequences are included to illustrate particular aspects of the story concerned, though these are peculiarly static for depictions of such a dynamic sport as bobsleigh.

Indeed, given the dramatic nature of the sport, it would seem to have considerable potential to provide engaging action sequences. However, these are largely absent from Breaking Ice. There are also inconsistencies in the contemporary interview footage included, which is surprising, particularly the interview footage with a key contributor to the development of the Irish team, Larry Tracy, where sound issues are evident to the extent that one sequence is subtitled. Overall, while Breaking Ice takes on an intriguing and potentially engaging subject, the documentary largely fails to relay or communicate effectively why this sport should have evoked such interest and passion from those who first represented Ireland at the Winter Olympics.