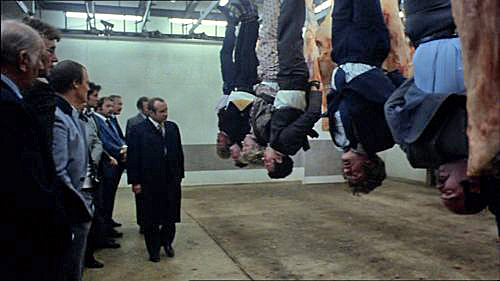 For the day that’s in it, Cormac O’Meara revisits the classic British gangster film The Long Good Friday.

It’s Good Friday, the Christian religious holiday commemorating the crucifixion of Christ. In secular terms it’s a day that leant its name to one of the greatest British films ever made, The Long Good Friday. America is the home of the gangster movie and, of course, has made some great classics. Warner Brothers had a boom of gangster flicks throughout the 1930s, similar to the success that Universal had with horror. During the 1940s the gangster film fused with mystery, spawning an increase in film noir. These effortlessly cool films influenced French filmmakers such as Godard, Melville and Dassin during the 1950s and the dawning of the new wave movement. The French took elements of Hollywood crime films and merged them with their own laissez-faire style. The British followed suit. But where the French utilised a smooth style to the genre, the Brits cut with razor sharp force. The British brought more grit to the genre. Unlike the Americans, they didn’t try to sugarcoat the grim realities of the criminal lifestyle. They didn’t attempt to make it look sexy or fun, or glamorize it in any way. The tone of these films was harsh, cold and unforgiving, making you feel like nobody within the film was safe.

The Long Good Friday is the pinnacle of British gangster films. There are other greats from this era too – Get Carter, The Hit, Mona Lisa – but where these films transcended from the gangster genre, The Long Good Friday sticks to its guns and flourishes within London’s underbelly, boasting a wonderful array of archetypal characters. It’s a film with a complex plot and character. Bob Hoskins is muscular as crime boss Harold Shand, who is in the process of going into partnership with the American mafia in order to buy London’s derelict dockyards and redevelop them for the 1988 Olympics. Harold and his firm must be on their best behaviour in order to impress the Americans, but Murphy’s Law has a sharp sense of humour that causes Harold to walk a tightrope between aristocratic and animalistic.

While Harold and his wife and partner in crime Victoria (Helen Mirren) entertain the Americans and the pocketed police on their yacht along the Thames, a series of deadly events unfold that puts a damper on their ambitious plans. “For 10 years we’ve had peace, and now there’s been an ERUPTION!” roars the cockney crime boss. We follow Harold and his gang on an odyssey throughout the city’s underworld, determined to decipher the cause behind this chaos. By his side predominantly are Jeff (Derek Thompson) and Razors (P.H. Moriarty), while level-headed Victoria uses her brains and charms to keep the Mob from hightailing it back across the Atlantic.

Barrie Keefe’s screenplay is stunning. It conquers plot, character and great dialogue that keeps you engaged throughout. Great lines such as “Meet Razors, or as the youth of today call him, the human spirograph” or in reply to one of his friend’s corpses being picked up in an ice-cream van – “Lot of dignity in that, isn’t there?. Going out like a Raspberry Ripple”. Despite being an edgy gangster flick, the film is extremely funny. Witnessing Harold’s predicament, in all his confusion, is almost screwball comedy. Yet the dramatic and violent scenes are equally as affective and keep you on the edge of your seat.

The genius behind The Long Good Friday, besides its excellent performances and screenplay, is the fact that the story takes place over 36 hours. I love the fact that all this carnage erupts on a Friday afternoon, and Harold has limited time to uncover the mystery in order to retain his connection with the Americans. The unsavoury, seedy characters that we come across on Harold’s hunt add to the rawness of the film. As the murders against Harold’s firm increase and the walls begin closing in on him and Victoria, the stakes get higher and we really begin to care for the couple and route for them.

The Long Good Friday still holds up today. Not only that, but it surpasses the majority of contemporary gangster films across the U.K. and the U.S. Bob Hoskins should be recognised up there with the likes of De Niro, Pacino and Nicholson for his work in crime genre. A great double feature to demonstrate his prowess as an actor are The Long Good Friday and Mona Lisa. Any young screenwriter or director interested in making a great crime film should watch this film and take notes. So if you’re off the booze this Good Friday and are in some desperate need of intoxication, switch on The Long Good Friday and get lost in its world. It’s a great movie.