Carmen Bryce talks to Kieron J. Walsh about his Derry-based crime thriller Jump, which opens in cinemas this week.

Despite being set and shot north of the border, Jump, which is released in cinemas on Friday, is not about the Troubles.

‘I think there was a collective sigh of relief when the film was screened, that although it was set in Northern Ireland, the plot was unrelated to the Troubles,’ said director Kieron J Walsh (When Brendan Met Trudy).

The shady comic crime thriller does have conflict at its core, not political but between people from entirely different walks of life who collide together over one explosive New Year’s Eve in modern-day Derry.

The story is told through multiple narratives inextricably linked by three groups of characters whose paths entangle, jumping back and forth in time over the course of the night.

The film opens on the lone figure of Greta (Nichola Burley), the daughter of a local mobster Frank Feeney (Lalor Roddy), disillusioned with life and posed to throw herself off the Derry Peace Bridge. Coming upon the troubled young woman,  a battered and bruised  Pearce (Martin McCann) attempts to talk her down off the bridge railings before it emerges that Frank’s  heavies were the ones who give him the beating.

What follows is an intense plot of revenge, romance and crime with layers of high drama and black humour throughout.

Walsh and co-writer Steve Brookes adapted Jump for the screen from a stage play of the same name by Lisa McGee. Building the screenplay from a theatrical script as well as keeping the complex narrative straight was, Walsh admits, a big challenge.

‘It was definitely a challenge to tell the individual stories while keeping the plot cohesive for the audience. There is a time jump in the film too which added to the complexity,’ said Walsh. ‘There are some great examples of this technique, Magnolia, Oh Lucky Man, Go, but multi-story narratives are a hard nut to crack and I’d think twice about doing it again.’

It was Jump’s producer Brendan J Byrne who first read McGee’s script and was drawn in by the energy of the new Northern Ireland it depicted. The script was reflective of the young people living in the here and now and not caught up in the country’s troubled past.

‘The play represented a city that had grown up,’ said Walsh. ‘With Jump, I wanted to show that you can make films in Northern Ireland that are not about the conflict there. I think it is unfair to define a whole country by this. I’m drawn to life in the North and its people. Frankly, I think they’re more interesting than people in the south and their sense of humour reflects this,’ he added.

After a ‘painstaking’ editing period, numerous re-shoots and the additional features of a poignant voiceover running throughout, Jump was complete.

The film has been well received both at home and overseas, selling out at the Galway Film Fleadh and at the Belfast Film Festival and recently screened at the Jameson Dublin International Film Festival – an experience Walsh describes as ‘the most nerve-wracking of all’  being the home turf of most of his talented cast.

‘The award was fitting as Jump is set in a city less than ten miles from the north-south border yet in the film, the border almost ceases to exist as it doesn’t dwell on the religious or political dimensions of the region,’ explained Walsh.

Jump opens in cinemas across Ireland on Friday, 26th April 2013. 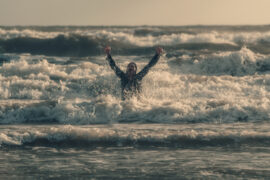 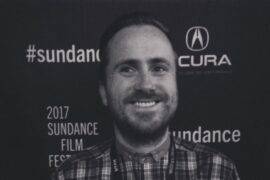