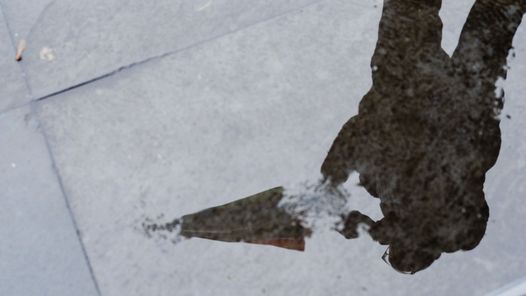 Sandra Costello spent some time in a Cork City pub on Christmas eve, floating over Glengarriff, hanging over the Atlantic in Dursey and dropping into an 18th-century field in West Cork.

In Aoise Tutty Jackson’s Listen we meet three people. Nóirín is a warm character, introduced to us as ‘Singer, Seeker, Searcher.’ She shares some of her thoughts on listening and her favourite lines of poetry. Pat is a ‘Critical Psychiatrist’ who comments on the complexities of mental health and the effects of the history of Catholicism in Ireland. Nicholas, who is seemingly given the most screen time, is a natural eccentric. The camera loves him as he dresses up, performs and reflects on his own philosophies and experiences.

In between scenes of these compelling characters, each within their own homes, we experience thoughtful sounds and images of nature. The rhythm of the film stays much the same throughout except in a couple of instances, the pace quickens suddenly. This gives the film a slightly haunting dimension, albeit briefly and subtly, so as not to interrupt the calming tones of the short as a whole.

There is an array of pleasing sounds to be found in Listen, but I personally would have liked there to have been a more developed and central sound design, including less spoken and written word. That being said, some thoughts and reflections offered are genuinely insightful as Tutty Jackson draws out the wisdom of three engaging characters that we never tire of.

The piece feels very spiritual throughout and achieves an overall therapeutic quality that allows the viewer to reflect on how they may be ‘allowed to play.’

The tone of Jennifer Courtney Leen and Megan Haly’s Bronagh is established within the very first sentence of the opening voice-over when the title character tells us that the meaning of her name is “sadness.” This tone is consistent throughout as we get to know a very solitary character meander thoughtfully through her weekly routine.

Though Bronagh has ostensibly chosen to live alone and move away from her previous life, it becomes clear that she no longer wishes to feel alone in her experience of her grief. Here, the film cleverly presents us with two conflicting notions of being alone.

Bronagh’s only real interaction is with her therapist. This is the only time that she is taken out of her own head space and these scenes, through lack of music, effectively express a certain clarity and calm that is absent in the rest of the film.

James Westlake’s wistful and daydreaming cinematography successfully isolates Bronagh from those around her as she seems to almost stare through the people she encounters. Tiz McNamara’s score is beautifully haunting. This is expressed more subtly in the beginning and increases as the narrative progresses towards a chilling conclusion.

Jessica Courtney Leen’s central performance is very engaging. We can relate to her feeling out of place and disconnected as we will her to feel more at ease with herself. The ending, however, feels a little odd in terms of the character presented up until this point and I would have preferred the film without it.

It is not clear whether Bronagh is more of a film about a character or about the universal experience of coming to terms with loss but that doesn’t seem to matter here.

Set in the beautiful surroundings of An Spailpín Fánach, A Christmas Drop instantly delights the eye with colourful tinsel decorations and Christmas cosiness. The sight of the inside of a familiar pub, particularly in COVID times, is particularly inviting.

Though a ghost story, this short in no way aims to scare. When the three Corkonian men arrive via a magic clock we’re reminded of the wholesome humour of a Christmas Guinness ad except that the stout these men gulp down is more likely to be Beamish or Murphy’s.

Steve Canty’s story of three Irish brothers, sorcery and a game of cards to gain ownership of a pub, is reminiscent of Irish folk tales of old. The chemistry between the three brothers is palpable. Although all three actors hold their own, the humorous performance of Michael Ryan is particularly impressive.

The Shining inspired beer mats are a clever reminder that these men have always been here. Maybe not these men, but men like them, in pubs up and down the country playing cards, reciting poetry and attempting to play music.

This film doesn’t delve too deep but it effectively conveys a changing Irish culture; one where the Irish pub has become a smoke free space and one where the cosmopolitan feel of a café might just supersede the thrill of a sneaky pint after work. Yet, as the film looks upon the impressive architecture of St Finbarr’s Cathedral and the city as a whole, we are reminded that the foundations of Cork and Cork’s pub culture remain strong.

Paraic English’s cinematography masterfully captures the picturesque hills amongst the familiar heather and gorse bushes of the Irish countryside. A poor farmer is shown as he makes his way up towards William Crotty who is dining outside with two companions. The farmer makes his slow ascent to ask William for help after the Red Coats have attacked his wife and taken his pig.

William and his companions proceed to condescend to the farmer accusing him of living a drab life with only ugly brown and green colours. They mockingly imagine he has never seen the colour red or even orange.

Writer and director Brian Crotty, who has a background in art, uniquely brings a discussion of colour into his dialogue in order to display contrasting ideas around class and beauty. The dining of these three figures in all their artificial colour stands in stark contrast to their naturally beautiful surroundings and makes them appear quite ridiculous.

William and his mistress are dressed in 18th Century upper class attire with pale make-up and wigs. The character of William is depicted as silly and grotesque and his appearance and misunderstandings are reminiscent of the absurd aristocracy in Yorgos Lanthimos’s The Favourite. His pale make-up highlights his yellow, vampire-like teeth giving him a predatory quality.

Red Mary Red skilfully comments upon Ireland and its complicated relationship with its own history and colonialism. It is a scathing criticism of the greed and selfishness of the upper classes. We do not see a united Ireland before us but an incredibly cruel and unequal Ireland that perpetuates violence upon itself.

Hanging Over The Atlantic

Fionne Walshe’s Hanging Over The Atlantic is a short and unassuming documentary focusing on the cable car that connects the small island of Dursey with the mainland.

We are first introduced to the mechanics of this cable car as a pulley is shown dragging the cable slowly around its wheel. The car shakes against the might of the blustery winds as this man-made structure stands in stark contrast to the cliffs and crashing waves below. Images of rusting nuts and bolts remind us that this cable car has become old and weathered by the elements surrounding it.

It seems very delicate and breakable, yet it is trusted to keep those within it safe every day. Images of rosary needs alongside workers clothes, holy water and a wrinkled print out of ‘Psalm 91’ stuck up on the inside of the cable car indicate an acknowledgement of nearby danger.

Most of the dialogue captured is indistinguishable, keeping us at a distance from the people who rely on this cable car. One conversation can just about be discerned where two men seem to discuss the weight that the cable car is able to carry.

Matthew McGuigan’s camera patiently watches on as a man loads the cable car with what look like bags of cement or animal feed and a large sack resembling a post bag. There is no rush, this is not a bustling city tram but a remote cable car.

This film truthfully and gently reflects on obsolescence, nature and technology in contemporary rural Ireland, without overstaying its welcome.

Michael is living his life in quiet disarray. His only company is a comforting dog who he appears to look after better than himself. He eats straight out of the saucepan and butters his bread before cutting a slice from the loaf. Reinforced by the film’s title, Michael is weighed down by grief.

Jesse Gilbert’s film is gentle and profound. The shots of nature coupled with Chris Lipscombe’s magnetic sound design give the story the rich texture it deserves and more than make up for an absence of dialogue.

Visual and aural clues tell us everything we need to know as this man’s loss is depicted in almost every frame. He chooses to eat at a messy table rather than an empty one, clearing enough space only for himself. He leaves the phone unanswered and hides from visitors. A neighbour references Seamus Heaney’s ‘Midterm Break’, a poem about death and loss.

Yash Suda’s exquisite cinematography spoils the eyes. In a standout scene where Michael is filmed from behind working on his big red paper project, he resembles Santa Claus working in his abundant workshop. Alluring shots of the remains of a famine village serve as a reminder that the past is ever present.

But, it’s the small details in the film that are most impressive; the mark left by the sticker on the door and the brief pause after Michael absent-mindedly throws part of his biscuit onto the floor. Though there is little dialogue and personal interaction, this film never feels slow as we are brought along a cathartic and moving journey comfortably, towards an extraordinary conclusion.