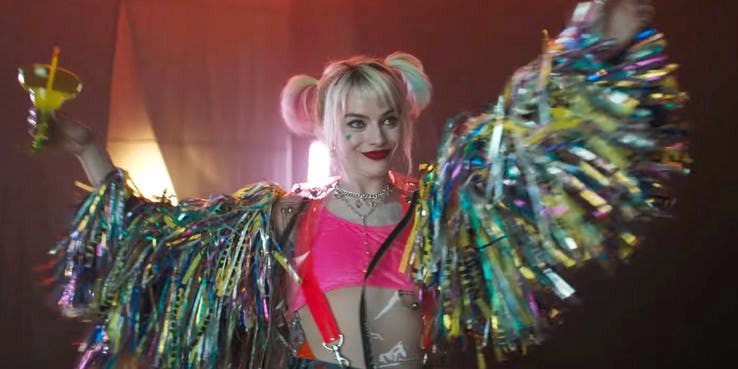 Review: Birds of Prey & the Fantabulous Emancipation of One Harley Quinn

Before I start, I must say I love the full title of this film.

DC’s Harley Quinn a sort of psychotic Betty Boop was, for many viewers, the most successful character in film Suicide Squad. So much so that the powers that be decided a stand-alone movie – well a stand-alone movie featuring some other heroines from the DC universe – was worth doing.

A quick potted history using animation and narration brings us up to speed on Harley’s life and entanglement with the Joker. Now, Harley Quinn is a broken woman, who has been unceremoniously given the boot by said Joker. In a moment of great drunkenness, she blows up the chemical factory where the couple first truly bonded. This act of recklessness lets everyone know she is no longer under Joker’s protection and soon all those people she upset are on the warpath.  Amongst them is Roman/Black Mask (Ewan McGregor) a narcissist gang leader; who has a penchant for watching his henchman flay people’s faces. Also having a bad time of it are an honest police woman Renee Montoya (Rosie Perez), suffering at the hands of her boorish male counterparts as she tries to get Roman put behind bars; Roman’s torch singer, Black Canary (Jurnee Smollet-Bell), guilty of being too decent; Huntress (Mary Elizabeth Winstead), a revenging angel of sorts; and finally an irritating young orphan pickpocket, Cassandra Cain (Ella Jay Basco). It is Cassandra that sets off the main thrust of mayhem when she steals a valuable diamond, which Black Mask wants very badly. Before you can say Birds of Prey, excessive violence is the order of the day.

Birds of Prey takes its storytelling cues from Deadpool and the structural jumbles that featured in so many Tarantino inspired movies from the ’90s.  Harley is our unreliable narrator and unfolds a fractured narrative as she tries to relay the events to us. Whereas Deadpool’s omnipotent presence in his own story was just short of jumping off the screen and sitting beside us, Harley fills in the blanks and information through narration with a modicum of fourth-wall-breaking with some added titles one might see in an anime.  The joke wears thin very quickly, flashbacks used to give weight to particular story moments in the present storyline just serve to show up how predictable and lazy the overall story arch is. We are usually way ahead of the plot.

The female cast give it their best shot but the material does not serve anyone well. Margot has proven herself in the past as a reliable actor but her shallow, psychopathic Betty Boop grates very early in the proceedings. The others manage to get to the end with some dignity despite weak dialogue and characterisation. Elsewhere, Ewan McGregor acts as if he is trying to mine the essence of Gary Oldman’s career in the 1990s, very badly. Most of the blame lies with the script and direction; all its attempts at humour and cheekiness consistently fall flat. The only joke that amused me was Winstead’s constant attempts to use her moniker Huntress when everyone else insists on calling her ‘The Crossbow Killer’.

Birds of Prey is figuratively and literally an hour and fifty minutes of man-bashing.  Its need to frequently stop and remind us what bastards men are does it no real favours; in fact it tends to dampen its lame attempts at humour. The film comes off like the feminist equivalent of a Blaxploitation movie, Feminstploitation if you will but instead of honkies being the bad guys; oh yeah, the honkies are the bad guys, who also happen to be white men for the most part.

There is not one redeemable male in the whole film; they are work bullies or psychotic abusers. We do get teased at one point when Harley introduces us to a sweet old man whom she trusts enough to have a hideout over his restaurant but even he is an untrustworthy male.  I suppose if you count Bruce, Harley’s pet hyena, there is one redeemable male. Oh yeah, maybe that’s the point?