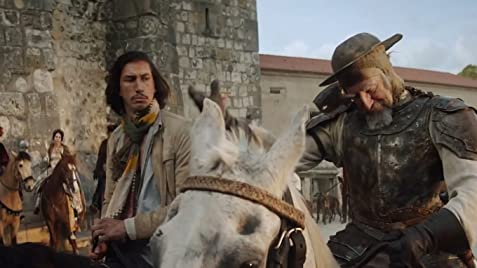 After twenty-five years give or take a few, Terry Gilliam’s dream/nightmare project, The Man Who Killed Don Quixote, has finally found its way to Irish cinemas.  The road has been long and hard and to those aficionados of Gilliam the film cannot be watched without this fact hanging over the proceedings, for good or for bad.

The odyssey to get this project off the ground is almost legendary and the subject of two documentaries, Lost in La Mancha, a chronicle of 2000’s jinxed production attempt and the forthcoming, He Dreamed of Giants, a document of the most recent production and an attempt to get inside the head of its creator. If the film does only one thing, it shows us that Gilliam has a perseverance and tenacity of supernatural proportions.

Despite its modern reworking of Don Quixote and introduction of a new main character, Toby Grisoni (Adam Driver), who eventually takes on the unwilling role of Sancho Panza, this version is extremely faithful to the original tome. This Don Quixote, played by Jonathan Pryce (the first man to turn the role down many years ago) suffers the same delusions of chivalry as his namesake but his quest takes place in the modern La Mancha.

A manic Adam Driver plays Toby Grisoni, a one-time idealistic, award-winning filmmaker, now a jaded, spoilt commercials director, working on a vodka campaign that is using the persona of Don Quixote to sell its wares.  At an indulgent dinner celebration a gypsy vendor of tat and pirated DVDs (remember DVDs kids) is found to have a copy of Grisoni’s breakout student film made ten years earlier. It so happens the short film also used the subject of Don Quixote and was shot in a small nearby village, using locals as actors.

Grisoni travels to the location where the short film was conceived, partly in a moment of nostalgia but also as an excuse to escape his film set and the evil eye of his producer, who may suspect him of getting it on with his wife the previous night. Arriving at the village where he had made his short film he learns that his leading lady from all those years ago, whom he had a dalliance with, has left the village in search of stardom and the cobbler (Jonathan Pryce), who played Don Quixote, suffers the same delusion as his literary namesake since finishing the film all those years ago and believes himself to be the chivalrous knight.

Before you can say, “they might be giants” this Quixote becomes convinced Grisoni is Sancho Panza and is soon leading him on a convoluted journey of deluded adventures around La Mancha. Reality and fantasy collide to great and confusing effect as Quixote tries to fulfil his errant knight obligations, in turn giving Grisoni the opportunity to reignite his previous love affair with his former leading lady and opening Grisoni’s eyes somewhat to the miscarriages of justice around him.

Here is where a lot of the problems lie. Gilliam’s jumbling of reality and fantasy combined with the convoluted, coincidental nature of the story make for a confused narrative.  Nothing is grounded enough for the audience to engage with the proceedings. For a long time Grisoni is a highly unlikeable character to hang out with. I found myself wondering if it would have worked with the original choice of Johnny Depp, whom Adam Driver seemed to be impersonating at times.

Pryce’s Quixote is fine but he is never given enough depth of character to make him truly engaging. The man he was before his transformation (the village cobbler) is never examined, the deluded Quixote is all we get, essentially a character come to life from a book, ultimately making him a two-dimensional creation.

The barrage of coincidence and contrivance may well reflect the source material but it leaves one a little cold, as Grisoni is dragged from event to episodic event through coincidence and a sense of ‘just because’. Finally, some sense does become apparent as the circle begins to close.  When that happens Gilliam’s targets of vulgar wealth and nasty oligarchs, though sincere, feel a little hackneyed. The ending though is pure Gilliam and makes up for some of the more unusual narrative choices found earlier on.

A familiarity with the source material will be of great benefit to those who watch. Those with a superficial sense of the great knight of La Mancha may be left feeling a little at odds with the events of the story.  Personally, for all its frustrating elements it is worthy viewing of anyone who consider themselves filmgoers. If, like me, you love this Quixotic filmmaker, I highly recommend you see it and find out for yourself if Mr Gilliam has been tilting at windmills these past twenty-five years or not.

The Man Who Killed Don Quixote is released 31st January 2020