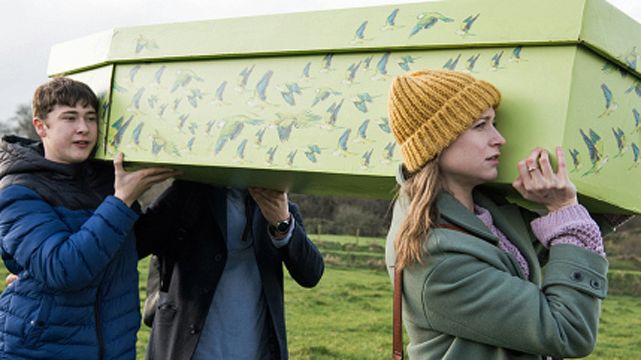 There are many reasons why one should not strike up a conversation with a nosey stranger on a long-haul flight. One of them would be ending up with an unwanted corpse to unload. This is the premise of newcomer Aoife Crehan’s comedy drama The Last Right. The film, written and directed by Crehan, plays on the tragedies of each of its character to create a humorous and absurd journey.

Dutch actor Michiel Huisman has a fresh and alluring onscreen presence as Daniel Murphy, the film’s protagonist, an American who must come back ‘home,’ to Ireland, to deal with some unfinished business. Samuel Bottomley’s performance as the autistic teen Lois (Daniel’s main business) is even more affecting.

But if you’ve seen Weekend at Bernie’s, Rain Man and The Legend of Billie Jean, you’ve kind of seen this film already, sans Irish accents and countryside. At points The Last Right is derivative enough to be parody: there’s a scene in which Daniel chases Lois in the rain as Lois runs out of the moving vehicle because he doesn’t feel safe. I sure hope Tom Cruise and Dustin Hoffman signed off on the tribute. But this scripting of autism doesn’t feel as tight and nuanced as it did in 1988 when Rainman was released, even if Hoffman’s character only represented a small percentage of autistics, as Lois oddly mentions in this film.

And then there is the tired rom-com trope of a bad boy who keeps messing up after he reveals his dirty secret, which would lead many women to flee, but not his loyal, good-girl, manic pixie dream girl Mary (played by Niamh Algar). This setup is as old as the aforementioned movies the film “borrows” from, and it’s difficult to watch a woman earn a spot in a complicated man’s heart through enduring his meanness in this political climate. Having said that, the onscreen chemistry between Huisman and Algar is palpable.

The movie shines when it centres on its characters’ lives in Ireland that could only take place in Ireland: a hilarious scene in a chipper, and relatable stories of Irish angst and youth (told as plot-tying reflection that could have been better served as flashback), and of course the stunning scenery of their journey from Clonakilty to Rathlin Island. And the journey’s pacing is entertaining most of the way through but making comedy out of tragedy is an Irish specialty that shouldn’t need to borrow any Americanness.

The Last Right is released in Irish cinemas on 6th December 2019.