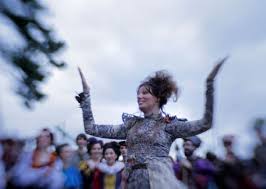 Galway has long been regarded as the cultural capital of Ireland. However, this reputation has rarely been interrogated on film to identify what may make the city and surrounding county distinctive for creative artists, and the more complex story that may lie behind this description. Aodh Ó Coileáin’s Cumar: A Galway Rhapsody addresses these questions through reflections from an array of Galway based artists from varied fields, including musician/composer Máirtín O’Connor; novelist Mike McCormack; poet Rita Ann Higgins; artistic director of Macnas Noeline Kavanagh; singer songwriter Róisín Seoighe; visual artist Pádraic Reaney; and comedian Tommy Tiernan.

These reflections are accompanied by stunning imagery of Galway city and county that perfectly complements the perspectives offered while confirming the scenic beauty of the area that provides inspiration for many of those featured. Within the documentary, each contributor reflects on their own creative process and the inspiration they have taken from the space around them – these are not always entirely positive recollections; they speak to the complexity of Galway as a space, as well as the challenges of the artistic process itself. The creative work of each contributor is threaded through the documentary, providing musical, visual, and literary accompaniment to their words and the images featured.

A recurring trope throughout the work is the concept of confluence (one of the many definitions provided for Cumar in the production) – Galway through history has been above all a meeting place, most obviously for the waterways across the city that converge in Galway Bay, but also for the many individuals down the years of varied backgrounds, cultures  and languages that have interacted, and influenced each other while making Galway their home. Ó Coileáin foregrounds this theme of interaction through a conversation between Tommy Tiernan and Mike McCormack, to which the production repeatedly returns.

Given the presence of Ireland’s largest Gaeltacht in the county, Ó Coileáin rightly chooses to take a bilingual approach to the topic and the Irish language itself is a recurring theme, even among writers (such as Rita Anne Higgins) who write primarily in English. However, there is also a tension evident here at times, articulated most clearly by Tiernan who refers to the linguistic divide between the city and Gaeltacht area.

There is a further critique evident by Mike McCormack of the failure of the city to provide adequate exhibition space for the visual arts in particular. While Galway may pride (and market) itself on the prominence of culture and the arts, there is a strong sense expressed across several of the contributors here that this status is not always supported appropriately in terms of either facilities or support provided for the arts in Galway.

However, overall this is a celebratory work. In advance of Galway taking over as European Capital of Culture next year, Cumar: A Galway Rhapsody is a timely, engaging and at times provocative reflection on Galway (city and county) as a distinctive place from the perspective of some of the city and county’s leading creative figures.