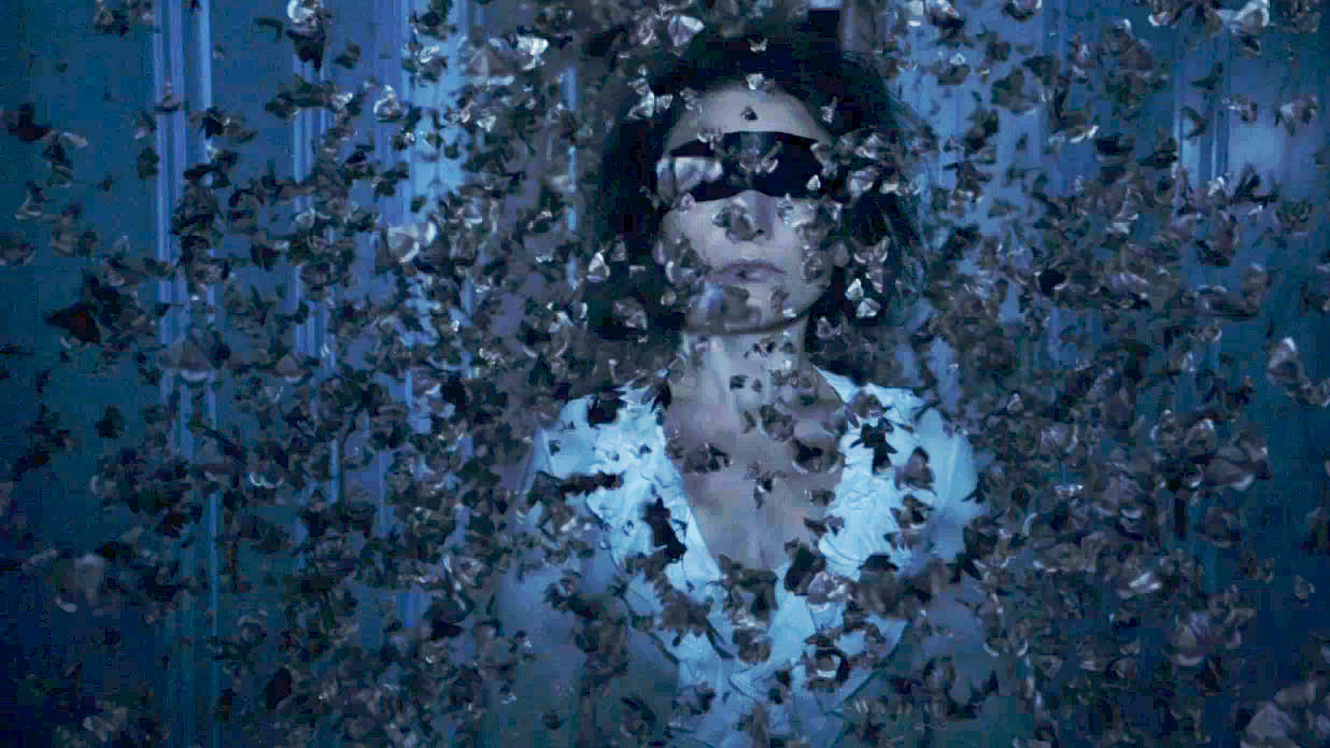 The Duke of Burgundy

Peter Strickland’s third narrative feature, and first unqualified masterpiece, The Duke of Burgundy seems certain to be one of the most exotic and rewarding features to grace cinema screens this year. Following his haunting parable Katalin Varga (2009) and his fascinatingly skewed Giallo homage Berberian Sound Studio (2012), Strickland’s latest film once again sees him take a connoisseur’s eye to European cinema, creating something entirely new from a foundation of meticulous reconstruction.

Because this is a film that relies – initially at least – on a highly specific tone, no synopsis can do it justice. In the most straightforward terms it involves a couple of entomologists, named Cynthia (Sidse Babett Knudsen) and Evelyn (Chiara D’Anna), whose relationship is structured around sadomasochistic rituals. Day after day they enact scenarios that lead to Evelyn’s eventual punishment by Cynthia, in ways that are best left for the viewer to discover. However, over the course of the film, the power structure behind this obsessive, cyclical relationship is revealed as very different to what it might first appear to be.

Throughout, Strickland has painstakingly recreated the aesthetic of 1970s European erotica – particularly that of Jean Rollin (The Nude Vampire, 1970) and Jess Franco (A Virgin Among the Living Dead, 1973). The opening titles alone are a master-class in creative re-appropriation, with freeze-frames, colour filters, and pitch-perfect typography evoking a highly specific look and feel with immense precision. Of immeasurable help in this regard is the beautiful score by the band Cat’s Eye, made up of Faris Badwan (best known as lead vocalist of The Horrors) and Italian-Canadian soprano and composer Rachel Zeffira.

The reference points for Strickland’s eerie, hermetic world are myriad. Strickland’s fascination with props recalls that of the Polish animator and director Walerian Borowczyk, whose films Blanche (1972) and Immoral Tales (1974) share a similar sense of the sexuality of inanimate objects. Strickland himself has cited the Czech auteur Juraj Herz’s gothic melodrama Morgiana (1972) as an influence, as well as Rainer Werner Fassbinder’s The Bitter Tears of Petra von Kant (1972). The exclusive concern with the feminine evokes Frank Wedekind’s novella Mine-Haha, or On the Bodily Education of Young Girls (1903), as well as its film adaptation, Lucille Hadžihalilović’s Innocence (2004). While Wedekind’s novel and Hadžihalilović’s film pushed men to the shadowy periphery of the action, Strickland’s film does away with them altogether. Not a single male appears onscreen in The Duke of Burgundy, and no explanation is offered for their absence.

Similarly, Strickland offers no reason why entomology and sadomasochism seem to be the foundations not just of Cynthia and Evelyn’s relationship, but of the entire society in which they reside. The film’s commitment to its fantasy is complete, its every detail mapped out according to a programme that is as specific as it is mysterious. The effect is a film that complicates the idea of what constitutes “sexual” material. In one sense, onscreen sexual content is kept to a relative minimum (no nudity is shown, for instance). In another sense, every word, action and gesture in the film is sexual, since it takes place in an environment determined entirely by highly specific desires and fantasies. The film’s form is as fetishistic as its mise-en-scene, with looped footage and recurring sections invoking the way in which repetition becomes the animating force of sexual fetishism.

The Duke of Burgundy is by some distance the most rarefied film about sexual fetishism since Luis Bunuel’s Belle de Jour (1967), and it would be essential viewing for its surface alone, but what lingers most in the memory is its depth. Beginning as a thrillingly offbeat piece of erotica it eventually reveals itself to be one of the wisest and most humane examinations of love and its limitations yet put on film. A late scene in which a familiar encounter between the two women takes an unforeseen turn is extraordinarily moving, because at this point we realise that the exotic world inhabited by these characters is, at heart, a mirror of our own. An extraordinarily realised work of fantasy that is also a profoundly truthful exploration of the human heart, The Duke of Burgundy seems certain to be one of the films of the year.

The Duke of Burgundy is released 20th February 2015