Producer Roisin Kearney tells Film Ireland about Prodigy, in which a young boy begins to suspect his new neighbour is a world-famous pianist who has been missing for over twenty years.

The making of Prodigy was a dive into the collective madness that is indie filmmaking. While shooting another short together Naomi Sheridan [Writer/Director] got the news that the legendary pianist John O’Conor would like to play the part of Sebastian in a script she had sent him called Prodigy.

Not only was he willing to play the part but he had a suggestion as to who could play Gabe, the young boy in the film, his student and up-and-coming talent, Joe O’Grady.

John, who was in virtually every scene was available for 5 half days – he was working in the Royal Irish Academy of Music in the mornings. It was insane, but we did it anyway. There were numerous locations, crew changes, and an incredible amount of goodwill and advice, but most of all help, from too many people to mention. But I would like to give a special shout out to Filmbase and its staff, there is no way we could have done it without their help and advice.

And now here we are, in the Cork Film Festival for our Irish premiere. It’s been a long road to get here but worth the wait and I have no doubt the sleepless nights of Neil Horner, who looked after almost all of the post-production after picture lock. We had one or two of them ourselves, but it’s kind of like childbirth, you forget the pain and only see the result, a result that I hope will bring plenty of joy to those who see it. We feel it captures a moment in time, a permanent record of two of the greatest pianists in the world, together on screen in a little Irish indie film called Prodigy. 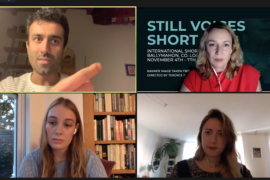 Wayne Byrne – Author of ‘Welcome to Elm Street: Inside the Film and Television Nightmares’