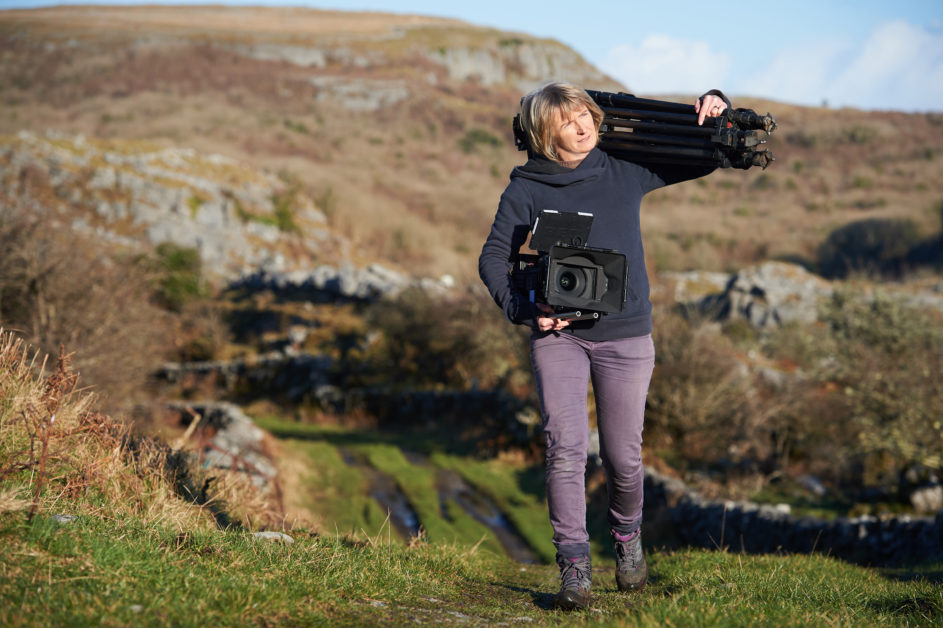 June Butler spoke with director Katrina Costello about her documentary The Silver Branch, which tells the story of Patrick McCormack, a farmer and poet whose family have lived in the Burren for generations. The film explores McCormack’s relationship with the Burren; its nature, history and the struggle to preserve it.

In April 1991, the Government announced the establishment of a national park in the Burren and construction of a £2.7 million interpretative centre. The Burren Action Group took a case against the Government to halt proceedings in order to maintain the natural integrity of the landscape and to protect the environment. They viewed the Burren and the area of Mullaghmore as a “sacred site”, a holy ground that needed to be defended – especially in a country whose sites of profound historical importance are rapidly disappearing.

JB: The story of the documentary focuses on the Battle of Mullaghmore but at its heart the film is really an ode of praise to our land.

KC: Absolutely. People put different weight on the Battle of Mullaghmore, which we called it when we were creating the storyline. This was woven through the documentary and everything hung off it. But I like to think that this film is really a eulogy to the agrarian culture and to our heritage and the natural world.

The battle was a defining event that caused Patrick McCormack to stand up and say we are connected to the land, we have lived here all our lives. This is more than just a building that we’re building, this is a total ruination of something that will resonate negatively in generations to come.

That’s it. I think that The Burren Action group had no problem with the interpretive centre being built in one of the towns but they didn’t want it at the foothills of Mullaghmore mountain. Not just because of the pollution and the 450,000 people coming there; it’s the whole widening of the roads. For 2 buses to pass on that road, it’d be basically making a motorway through a wilderness area and through an area that’s been farmed for generations. The Burren wasn’t developed like other parts of Ireland because it’s so rocky and the small little field system still remains intact – forts, Mesolithic tombs, famine villages and thousands of miles of stone walls that go right back maybe 6,000 years.

When Patrick spoke about the ancient warriors and people gathering around the campfire, I felt very much that he is not of this era. I feel that he’s a wiser, older soul.

I think Patrick probably has his legs in both worlds – in the contemporary world and the ancient world. What’s fascinating about him is that he can be so ordinary. He’s a farmer, he’s maintaining stone walls, throwing rocks around. He’s got this fantastic vision, which, I suppose, is the vision of a poet. Like Heaney and Kavanagh he’s just grounded in the earth with a beautiful vision and a very rare gift of being able to articulate his most intimate thoughts. He’s constantly searching for his own defining line, his own unity of being, for harmony, to be free. Basically, when this battle came to him, he had no choice but to take it on because he could foresee that, for future generations, this interpretive centre would’ve actually spoiled the whole wilderness area.

I love the opening scenes where the branches intermesh with each other. Patrick talks about the silver branch singing and telling the story of ancient times.

The silver branch in essence was a mythical wand of the ancient druids and was used to bring them to the Tir Na Nog, for example. It was used to go on a journey of enlightenment or to seek truth. This is why I really love the title The Silver Branch because, for me, it is just that – it is inviting people to go on their own sort of hypnotic journey into themselves. It brings them to a place where they haven’t been to for many, many years – the wonder of being a child.

The Burren looks amazing in the film. I have to talk about the beautiful cinematography, like the flowers opening and closing, and of birds feeding and being fed. It must have required a lot of patience to capture so much beauty.

For sure, any time that you go out to film something in the natural world it requires a lot of patience. You have to wait for hours for nature to settle around you. Once you go into that environment you could be 4 or 5 hours before you actually see any proper activity. You have to wait to capture the moments of magic. But it never felt like a day’s work. I love the Burren. I think there’s no place like it in the whole world, to be honest with you. It’s as spectacular as any place I’ve ever seen on earth… and I’ve travelled a lot – through Asia, America, Australia South America. It’s an incredible landscape not just for the wildlife, of which there is an abundance. There’s always something fantastic happening. There’s foxes and ravens and hares, peregrine falcons, butterflies and dragonflies, you name it. And then it has all of this cultural significance as well. It’s a very, very rich atmosphere.

There’s a beautiful scene where he’s telling the blonde child how he me his wife,  Cheryl. He says she was on the back of a fox, and that he tempted the fox out with a bit of cheese. The fox came out with Cheryl on its back and he grabbed her off the fox.

Everyone loves that scene!

And the child is incredulous. He tells the story in such a way. I found myself delighting in the fun of it. It was a golden moment. You can see how fun he is.

Absolutely. He’s a seanchaí, he’s a poet, he’s a farmer… but he really comes into himself when he’s with kids or when he is with Jonjo, his dear neighbor. He loves that interaction with children and is in total awe of people like Jonjo and his generation.

I could have listened to Patrick for many hours. His poetry and his language is so beautiful. He reminded me of Heaney with his beautiful turn of phrase. I was amazed then when I found out he didn’t complete his schooling.

Isn’t it incredible? He did leave school when he was 14. He hated it. He found it a degrading, demoralizing experience. But he did have a strong love for the great masters, as he would call them himself – for English, poetry and history.

Coming away from the film, I felt that we really need to re-connect to this way of life that is so in tune with nature and the land. Something that has great resonance and depth to it and something that many of us have lost.

It’s just about giving yourself time in nature. Even something simple like leaving the phone behind you. Nature is something we can all connect to. I strongly believe that the natural world is part of all of us, whether we live in the city or in the country. I think deeply and instinctively we feel that and although we can become disconnected, it’s important to make that connection. I think that, although this is Patrick’s story and his battle, it resonates with us all because it is a story of all of our struggles in modern-day life. This is a story about love and what he would do for love, and commitment, and family. He is a warrior and thankfully it’s a battle that came to a good end. We still have that fabulous wilderness to enjoy – and there is an interpretive centre in both Corofin and in Kilfenora.

The Silver Branch screens at