Chris Lavery delves into the IFI Irish Film Archive and chats to its Head, Kasandra O’Connell, about the preservation of Irish film.

It’s the early 1950s, and John Ford is filming in Ireland for his latest feature – The Quiet Man, starring John Wayne and Maureen O’Hara. Kevin Murray, a building contractor from Sligo, is indulging his hobby and is doing some filming of his own, capturing on-set footage of The Quiet Man being filmed.

Many years later, his widowed wife, Peig, is on the train down to Dublin to donate her late husband’s old amateur film collection to the Irish Film Archive in the Irish Film Institute, including not just The Quiet Man footage but reels of footage of family life.

“She used to come down on the train from Sligo with plastic bags full of cans of film and sit there with Archive staff while we discovered them together,” recalls Kasandra O’Connell (pictured), head of the IFI Irish Film Archive, as we sit down after a tour of the archive and its many treasures. “She hadn’t seen the footage for many, many years. A number of her children, as well as her husband, were deceased so it was very emotional for her to discover these films.”

Not only was she reliving her family life from years past, but she was also helping to provide an accurate historical account of life for this average family from Sligo.

“There were a lot of films and it was really useful to have her there to be able to explain to us who people were and why the films had been created, which is often the link that is missing if you get material in,” Kasandra tells me.

Ireland was one of the last countries in Europe to set up their own national film archive in the 1980s (even though the Irish Film Institute was set up in the 1940s), mainly due to the fact there were not many commercial productions being made in Ireland at the time. From its infancy to the present day, the IFI works a three-pronged approach to Irish film – education, exhibition and preservation. The Archive itself is offered as a resource to help educate on Irish cultural subjects and public information, using its collection as a distribution library, made available to everyone including filmmakers, students and the general public.

The Catholic Church had been prominent in the IFI’s inception in the early days, showing great foresight in recognising the value of film footage as a cultural record. In fact, much of the early amateur film footage included in the distributing library was filmed by members of the clergy. Not only because they saw the value in film’s cultural significance, but also from a practical perspective – they had the time and the money to do it.

But having Church involvement in matters relating to what is deemed acceptable to be included in the IFI’s distributing library could be seen to be a divisive issue. However, this issue had already been foreseen.

“By the time we developed the Archive in the late ’80s, we had already broken our associations with the Church. But I suppose it did have an impact because we used our distributing library as the basis of our archive collections. The Irish material that had been part of the distributing library material…there would’ve been a slant, I suppose, on them,” explains Kasandra. “The material that we in our association with the Church had considered to be morally and educationally acceptable.”

This material would’ve included a wide range of government public information films, including topics such as savings, tuberculosis, and safe cycling, which were “really instructing people on how to make sure they were healthy, clean and morally correct!

“But then also all the ones about the cultural importance of Irishness and that kind of thing…I won’t go as far as to say propaganda, but putting us in a good light!” laughs Kasandra.

Not only is the Archive home to the quirky (within the archive resides an information film about how to build an igloo, dubbed into Irish) but also the vitally important – the Archive has the only known footage of the Magdelene laundries from the 1930s (which was filmed by a priest).

The importance of the preservation of Irish film is a topic Kasandra feels strongly about, writing extensively on the subject in 2012. She quotes Martin Scorsese as saying “Film is history. With every foot of film that is lost, we lose a link to our culture, to the world around us, to each other and to ourselves”, which begs the question: what links to Irish culture are missing in the Irish Film Archive?

“One of the things I’ve found very difficult to find in recent years is state-sponsored films, and the kind of material that, historically, we are very strong on which are the public information films and the Bord Failte tourism films. In the last 20 years there has been no conduit for that material to come directly into us,” laments Kasandra. “So there may be collections of tapes of Imagine Ireland tourism or The Gathering, all that kind of stuff, in particular companies that would’ve been hired to do the PR, but there’s no centralised collection, and no concerted effort to make sure that it is preserved in a way that people can have access to it and study it.”

But that isn’t through a lack of trying. The IFI have attempted on a couple of occasions to get governmental cooperation to compile some of this material in order for it to be archived properly, before it is potentially lost forever. It’s easy to think that these sorts of PR films on Ireland aren’t of much cultural value, but Kasandra feels this is a mindset that needs to change.

“We won’t be able to look back the way that we look back now on how we portrayed ourselves. I think the official voice of the Irish government or the Irish people on this subject isn’t going to be easily accessible. Whereas we have a beautiful picture of how we thought of ourselves in the ’50s and ’60s!”

As new technology drives us forward into the digital age, more and more filmmakers, both professional and amateur, are embracing the world of digital film. Thanks to digital, video cameras are now cheaper, smaller and more accessible than ever before, with some people making films with their smartphone. Together with the rise of social media and video-sharing sites such as YouTube and Vimeo, publishing new amateur film has never been easier. So it would be easy to assume that archiving digital film material is also getting easier.

“Climate control vaults for film are very expensive to run, but we know what to do with film. We put it into a cold space and we leave it there,” she explains.

But when you have a large archive of digital films, “that’s when you’re into a never-ending cycle of migration and refreshing and updating and making sure that all your files can open in a year’s time. You have to interact with them constantly to make sure they’re still useable.”

One of the main issues with storing digitally is there is no set ‘gold standard’ – no agreed format in which to preserve digital film across the industry. So as archivists, Kasandra and her colleagues are advised to use three different formats! If they can afford to, that is.

The real problem though, as Kasandra sees it, is the false assumption that absolutely everything that’s ever been committed to film and properly archived is now going to be available digitally. However, by and large the only films that will be digitised are the ones that are going to make money “because people aren’t going to invest in digitising material that they can’t get their return on as it is such a costly and time-consuming process.”

Due to the level of care that needs to be taken with preserving digital files and the strict budgetary choices being made as to which films are digitised, there will come a time when it will be difficult to find such discoveries as Kevin Murray’s footage of The Quiet Man.

“Due to equipment obsolescence and the speed at which technology changes, you won’t have situations where people are discovering the digital equivalent of boxes of film reels under their bed and sending them in to us. Whereas with film, it is robust and has survived being poorly stored and the mechanism used to watch it hasn’t really changed over 100 years.”

And there is a real worry that history could repeat itself:

“The films that are considered worthy of being digitised and then being preserved will be very easily accessible but there’ll be a whole swathe of digital material that people don’t have the resources to look after. It’ll be like the silent films that no longer exist because nobody thought they were important enough.”

Recently, the Broadcasting Authority of Ireland announced they are making funding available (about 2.8 million euro a year) in the form of grants to anyone who has broadcast-related collections for preservation purposes. Hopefully other government agencies will recognise the value of the work being done at the Irish Film Archive, and other archives across the country, and put something similar in place for the non-broadcast moving image collections that are such an important part of our heritage.

To find out more about the Irish Film Archive, visit www.ifi.ie/archive 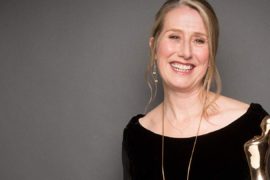