June Butler reviews Marie Kreutzer’s fictional account of one year in the life of Empress Elisabeth of Austria.

In 1854, at the tender age of sixteen, Duchess Elisabeth Amalie Eugenie of the Bavarian House of Wittelsbach married the older and infinitely more urbane Franz Joseph I, Emperor of Austria, and King of Hungary. Having left a realm where strict protocol was not necessarily followed, Elisabeth (or Sissi as she was affectionately known), found it difficult to adjust to a more formal Austrian court with its rigidity in subscribing to strict etiquette. In those days, Sissi’s role was to act with dignity, produce offspring with emphasis on a male heir, and have no input into politics or attempt to sway her husband’s opinions. She was essentially a figurehead without power, and every aspect, physical beauty, weight, fashion choices, could be commented upon while Elisabeth was expected to grin and bear it. Or remain stoic and silent. When Sissi reached the age of forty, she no longer appeared to have any autonomy regarding her personal wishes and the ethereal beauty she once possessed, was whispered to be a thing of the past. Her childbearing years were behind her after giving birth to Rudolf, son and heir to the throne, and his younger sister, Valerie. Franz Joseph could have mistresses, Elisabeth faced ignominy and ruin should she do the same. Franz Joseph was allowed to have an opinion and his input was revered. Sissi was forced to stand by while injustices were ratified. Obligated to become voiceless and reticent, she was literally a shell without substance and nothing else. She was no longer the centre of anyone’s world but desperately yearned to be ‘seen’ rather than simply witnessed.

Vicky Krieps excels as the middle-aged (for those times), Empress Elisabeth. Sissi is mischievous and sensual but those around her are oblivious to her charms. Krieps does a formidable job at depicting Elisabeth’s two sides – one of erstwhile famed beauty and allure, the other being a bored, ineffective dilettante, who serves no other purpose other than to just ‘be’. Her callous side is portrayed when Sissi refuses to allow her sister to marry lest she abandon her. Selfishly, Elisabeth places her needs above those of her sibling who is obliged to remain unwed and lonely in Sissi’s employ.

Sensitively written, and beautifully directed by Marie Kreutzer, Corsage showcases the lives of women in nineteenth century Europe and most prominently, queens and duchesses. Once wed, freedom to live and love as they chose, was effectively over for many royal women. Even women in their service – maids and confidantes, became invisible, seemingly devoid of feeling, empty shells. Women without names, interchangeable and faceless.  Tellingly, Sissi is so wrapped up in her world of pain, she does not care to recall the moniker of one of her female servants. Each woman is dismissed without concern and expected to obey without hesitation.

Sissi is imagined as a vibrant, yet flawed woman in her prime. Having said that, Kreutzer’s emphasis on Elisabeth reaches a point where the only story seems to be that of just Elisabeth and not of her interactions with others. It would be true to say that Sissi’s narrative began and ended in a microcosm of minimality, but it could have been interesting had the tale gone a little further by delving into peripheral, fictitious other relationships, even to witness how Sissi might have grown or diminished within that interaction. For example, Elisabeth was touted as a keeper of flames, a woman ahead of her time – throughout the film, she meets various pivotal figures, a photographer who was attempting to create moving pictures, and a doctor attached to an asylum. It might have shown Sissi as a more rounded figure had she been allowed to pursue these exchanges, even to fabricate outcomes, just to see ‘what if’. Kreutzer herself, wrote scenes that deviated from reality – they were no less the centre-point of the story but given that these were included, had Kreutzer brought just that bit extra into the fiction, and shown a more faceted Empress Elisabeth, it could have balanced the tale a little more.

Casting was utter perfection as too was attention to detail and continuity. Corsage oozes perfection and sensuality. Kreutzer has reached the pinnacle of her metier with this wonderful film.

Corsage is in cinemas from 5th January 2023. 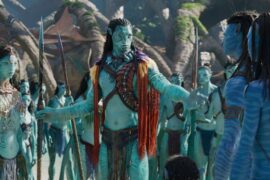