In rural Ireland, a young couple Caoimhe (Johanna O’Brien) and David (Fiach Kunz), are about to give birth to their first child. An ultrasound scan has indicated they are expecting a boy. Opening scenes show Caoimhe and David as they paint the nursery. Caoimhe’s sister Mairead (Cate Russell) arrives to offer final words of encouragement prior to the birth. The mood is one of jubilant anticipation.

Caoimhe goes into labour and the baby is born. David is by Caoimhe’s side supporting her in every way. However, instead of delight and tears of happiness, worried glances and silence greets the new parents. Hurriedly, the midwife attending the birth scoops up the newborn and leaves the ward, refusing to tell the young couple what the problem is.

Lambing tells the story of what unfolds when unforeseeably tragic events overtake an otherwise joyful time. It delves into the preciousness of birth, the depth of love a father feels for his child and the helplessness when societal norms kick in thus jeopardising the wellbeing of a baby. The short film brings into play how physical differences can be judged through ignorance. Instead of celebrating their beautiful child in its own uniqueness, Caoimhe and David are urged to tell no one about the circumstances of their baby’s birth. In an emotionally charged climax, David’s father John (Pat Shortt) is the conduit that links and holds his fearful son in a place of love and forces him to honestly witness the truth.

Lambing is sublimely moving. All the actors in this wonderful short film deliver with aplomb – but the final award for an utterly astonishing performance, must go to Pat Shortt. A man of many different masks – from comedy in Father Ted (1995-1998), and The Guard (2011), to a more serious role in Dark Lies the Island (2019), Shortt puts on the show of his life.

Mesmerising, heart-breaking, absolutely spellbinding – Lambing is a film worth watching again and again. 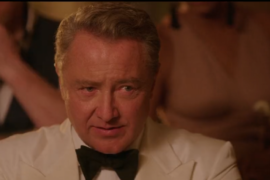