Gemma Creagh takes a look at the latest offering from Marvel, Eternals.

Jumping from various points in history, from Mesopotamia to the fall of Babylon, we’re introduced to these almost-immortals through a series of snapshots detailing their lives on Earth over the last seven millennia. Unaging, and sometimes mistaken for gods, this powerful group of beings were created by Celestials to protect the Earth’s inhabitants from Deviants, a violent and monstrous race of aliens. However, the Eternals were issued with strict orders not to use their powers to interfere with human conflicts, a fact which causes contention between the free thinkers of the group and their leader Ajak (Salma Hayek). When the Deviants are finally defeated, the Eternals disband to the four corners of the globe, engaging in an extraterrestrial rumspringa as they wait to be called home.

The action really kicks into gear in what Marvel deems to be the present day: 2024. In London, our protagonist, the earthy and permanently late Sersi (Gemma Chan), is passing for human as she teaches in the Natural History Museum with the help of her colleague and love interest, Dane Whitman (Kit Harington). After being attacked by a Deviant, this one stronger than any faced in the past, Sersi only barely manages to escape thanks to the help of her all-powerful ex of 5000 years, Ikaris (Richard Madden). Realising that the Eternals’ mission hasn’t been completed, Sersi, Ikaris and Sprite (Lia McHugh) must get the gang back together for one last mission. However, not all of the Eternals are easily convinced, as the unstable warrior Thena (Angelina Jolie), and the angry, disillusioned Druig (Barry Keoghan) have a few objections.

A staple of any good superhero film is, of course, the quippy dialogue, which in this instance is delivered by the vain but lovable Kingo (Kumail Nanjiani), who has used his powers and immortal good looks to become a huge Bollywood star. With POC in many of the major roles, this is the MCU’s most diverse cast yet and notably features Lauren Ridloff, a real life deaf actor, bringing charm and humour to the role of the deaf superhero, Makkari, while Phastos (Brian Tyree Henry) is the Eternals’ cosmic engineer, a loving parent and openly gay man. It’s worth a mention that our very own Barry Keoghan does us proud, channelling an Aiden-Gillen-esque intensity to his performance as Druig, along with all the bad-boy attitude that entails.

The visual elements at play help to sell the subtle environmental themes. The locations are rich and real, yet in line with the MCU, as Zhao built the world’s aesthetic with cinematographer Ben Davis (Guardians of the Galaxy, Doctor Strange, Captain Marvel). There are moments of reprieve in nature, along with a gritty punch to the child-friendly violence. Zhao cites The Revenant (2015) as an influence on the film’s action sequences. It’s a shame that the CG elements detract from the visceral elements of the film, leaning into the cartoonish at certain points.

With a run time of two hours and thirty seven minutes, and a very large cast of supporting characters, there’s a mountain of world building and character development to get through – let alone satisfy the required amount of MCU action. (Did somebody say “big powerful beam?”) However, Eternals just about manages to cover it all, and maintain emotional engagement, all while keeping the pace up, and the complex plot moving along. This is in itself no mean feat, and a testament to the Oscar-winning Indie darling director Chloe Zhao and co-writing cousin duo Matthew and Ryan Firpo. While the overall arc of this film is simple, there are deeper themes of systemic failures, challenging power structures, group politics, that will keep the bigger kids entertained, and even those unfamiliar with the MCU will find it followable.

Taking up space in such a well-mined universe can’t be easy, but Eternals not only manages to hold its own, but delivers something engaging, unique, funny and warm.

Eternals is in cinemas from 5th November 2021. 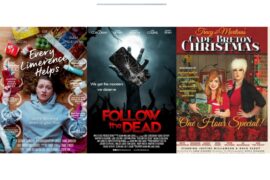