A slow, thoughtful German romantic comedy, Maria Schrader’s I’m Your Man takes an interesting look at modern dating. Inspired by a short story by Emma Braslavsky, this film is an odd blend of the surprisingly sweet mixed with the darkly funny.

In a ropey, vintage-style speakeasy, a guarded Alma (Maren Eggert) is introduced to the suave and handsome Tom. (Dan Stevens) He piercingly stares into her eyes and spouts cheesy lines, making her deeply uncomfortable. Right up until his over-the-top rumba number, this encounter has all the trappings of a blind date that’s going terribly – until Tom’s programming breaks. Alma is, in fact, reluctantly test-driving a prototype of sorts. Tom is a humanoid robot designed to suit her perfectly, his algorithm changing and adapting to please her and to ultimately become her perfect partner. She has to spend three weeks with him before she can hand him back and write up her report.

Back in her messy Berlin flat, Tom attempts to woo Alma with grand gestures involving champagne and rose petals, and he undertakes ill-considered attempts at cleaning and organising her flat. His well-meaning, child-like bumbling always misses the mark, much to Alma’s frustration. An archeologist, buried in her work, Alma resents these intrusions. However, when facing her ex and his new pregnant partner, or when caring for her father who’s suffering from dementia, Alma begins to warm to Tom’s supportive presence. What unfurls is a slow-burning, complex love story between Tom and Alma…

In many ways, this reverse The Stepford Wives/Her scenario poses many questions about the complexities of relationships in the digital age. For instance, what is the performative nature of Tom’s supposed “love”? What would be the fallout of socially accepting that an object of sorts could be considered someone’s potential partner? Whose needs and desires should be considered? But I’m Your Man presents no easy answers. Over the course of the film, Alma’s emotional journey, and Tom’s evolution are both subtle but authentic. Despite the outlandish premise, a woman dating her robot, Maria Schrader creates an arc and a bond between them that’s genuinely tender and truthful.
I’m Your Man is a considered, honest and surprising film that will follow you all the way home from the cinema – and will leave you looking at Siri in a whole new light.

Podcast: Interview with Phyllidia Lloyd, Director of ‘Herself’ 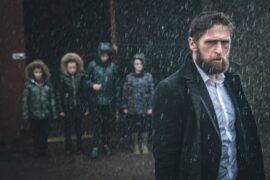