Occasionally you encounter a work that can reignite your appreciation of film and sometimes of life itself. Breaking Out is such a film. Received with several standing ovations at its World Premiere at the Galway Film Fleadh in July 2019, the production eventually won the Best Irish Documentary award in Galway, followed by its more recent George Morrison Feature Documentary Award at the 2021 IFTAs.

I regret I recall precious little of the life and music of the film’s subject, Fergus O’Farrell. A seminal figure on the Irish music scene in the 1980s, he was the quintessential ‘musician’s musician’ influencing (with his band Interference) many major musical acts to follow including the Hot House Flowers and the Frames. With his extraordinary vocal and song-writing skills, O’Farrell was a singular voice. However, for many people, his work was first encountered via one of the most memorable songs included in John Carney’s Once (2006), “Gold”, which features in the house party scene about half way through the film. The song is also a centrepiece of the theatrical musical adapted from the film and was performed at the Tony Awards when the musical won eleven awards.

O’Farrell’s achievements were all the more impressive as he struggled throughout his life with the effects of muscular dystrophy, a degenerative disease that gradually reduced his ability to perform. Despite an early prognosis at the age of eight that he would not live to see twenty, O’Farrell lived to see his 48th year before sadly passing away in February 2016. Fortunately for us, director Michael McCormack had discovered him during his initial Interference days in the early 1980s and followed his progress as a musician, allowing McCormack to bring together an impressive array of material chronicling O Farrell’s life, talent and life-affirming struggle with the disease that he grappled with.

While the film offers a deeply moving account of its subject, O’Farrell’s love of life itself and the phenomenal efforts he made to continue to record and perform as his body declined cannot but inspire. A particularly poignant aspect of his condition was that it is the lungs in particular that are most effected (he describes himself at one point as functioning with less than half of one lung by the end), leaving O’Farrell struggling for every breath he took as he sung. However, there is no self-pity here – not that his formidable but always loving wife Meng Li would ever allow it. She is described perfectly by O’Farrell as “like a controlled nuclear explosion” and their love story, from first meeting while he was hospitalised for pneumonia in Cyprus where Li worked as a nurse (brilliantly recounted in an animated sequence), to the care she provides him as he battles his body’s degeneration is just one of the many inspiring, moving, and revelatory aspects of the film as a whole.

There are many moments one could pick from this extraordinary film to highlight; for myself, the sequence of Glen Hansard breathing into a tube to provide O’Farrell with breath between lines of a song – as he recorded his final album “The Sweet Spot” with musical collaborators down the years in his home in Schull, Co. Cork, – are among the most moving shots I have encountered in recent cinema. This film will stay with you for many weeks, months and perhaps years after watching; it could even change your life, if you allow yourself to take inspiration from an individual who appreciated the preciousness of every breath you take. 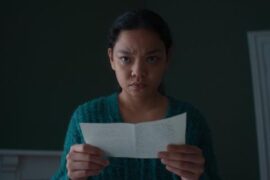