Northern Irish directors, Ryan and Andy Tohill, invite us to delve deep into the mire that is The Dig, as a small community is ravaged by an unresolved murder, a family is torn apart, and the truth is attempting to climb out of its water logged grave.

Ronan Callaghan (Moe Dunford), a stain on the local community has come home, and judging from the dilapidated house that he returns to, coupled with James Everett’s effectively somber score, his homecoming is not a joyous one. We learn early on that he has recently been released from jail for the murder of a local girl, Niamh, a night that he was too black out drunk to remember. Despite having served his time, Ronan’s sentence is far from over, as Niamh’s father, Séan (Lorcan Cranitch), and sister, Roberta (Emily Taaffe), are mining for the truth on the bog that his family owns. Persecuted from every angle, he attempts to solve the mystery of the holes in his memory, as well as the guilt that filters through him like silt, and so he picks up the spade to help Séan and begins to dig deeper.

With more shades of grey than an E.L. James novel, but with actual depth, The Dig avoids straightforward character development like a pothole in the road. The narrative is gradually excavated as the film progresses, moving from almost pure visual storytelling, into unveiling strategies such as solely using the protagonist’s surname in an attempt to dehumanise him, evolving into the ponderous enigma that is the night in question. Stuart Drennan’s writing elegantly weaves Irish mythology into this murder mystery, as well as ties in a reference to the Old Croghan Man, a remarkably well-preserved Iron Age bog body found in Offaly in 2003. The use of earth tones and natural light mirror the land in which it is set, contrasting with the abnormality of the murderous act itself, as Angus Mitchell’s cinematography employs sparse, wide shots of the landscape, allowing us to bear witness to the magnitude of the job that Séan and Ronan have ahead of them.

Metaphor is integral to the plot, insisting that the viewer recognise clues and personality traits through the use of analogies and colour. Ronan is clearly the house to which he returns to, abandoned, decimated by locals, and previously coming apart at the seams with alcohol. The bog in which they search for Niamh’s body is peppered with holes, marked with red and blue flags, which cleverly hint to the conclusion. Except for the first one that Ronan encounters; a single white flag, a surrender, and an acceptance to whatever fate awaits him as he shovels his own war trench.

Although The Dig may not fulfil the plot-heavy murder mystery category that some people may hope for, the premise is both novel and consuming, as a murderer helps a grieving father search for that which he took from him. There is substance to be found in the pursuit as the Tohill’s have purposely devised a bleak visceral experience. Yet perhaps they should have stayed more in the realms of Seamus Heaney than Agatha Christie, as when they veer more towards the latter the plot becomes increasingly conventional and more shallow than their earlier narrative. Nevertheless, what they have created is a striated and near tangible experience rather than an affected whodunit. 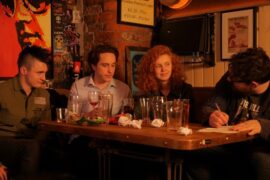