James Allen (Laurence O’Fuarain) is a successful, controlling, thirty-something banker living alone and working in Dublin city at the tail-end of the recession. When a family tragedy occurs at the hands of his employer he decides to take action which forces him to face a terrible childhood secret. Meanwhile, his mysterious co-worker Alison (IFTA-nominated Sarah Carroll) has her own agenda, which puts her on a collision course with James, triggering a dark spiral of deceit, revenge, and murder.

Gemma Creagh met up with writer/director Alan Mulligan to talk about his look at modern-day greed and desire, and society’s ever-growing need for control.

The Limit Of was released in cinemas on 5th April 2019 and is still playing in The Eye Galway and Mayo Movie World. 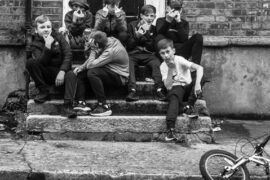