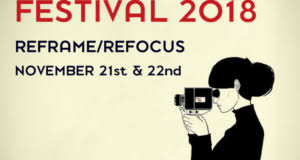 Barreling down boulevards as if a deranged dodgem on the lam, skipping curbs, stubbing toes, just the sight of orange hair skating over the horizon was enough to make any pedestrian cross the road.  With four wheels pointed straight and a joystick stuck in accelerate John Callahan made his name from spinning wheels and rolling eyes.  And like how he charged his wheelchair through Portland’s populated pavements, his satirical cartoons never put on the brakes.  With acerbic wit nipping all in his path, from clergymen to the Klan, no one was safe when there was a marker in hand.

When it came time to tell his story, it was Robin Williams who first optioned Callahan’s autobiography – from which the film takes its title – in 1998.  With Williams to play the lead and Van Sant on board to adapt/direct, the idea seemed the perfect follow-up to the mainstream success of Good Will Hunting (1997).  But as years turned into decades and drafts turned into more drafts the project never left the page.  Following the deaths of Williams and Callahan himself in 2010 there seemed little hope for the biopic to ever get made.  That was until Amazon Studios picked it up after Joaquin Phoenix was brought in to don the tangerine fringe.

Don’t Worry, He Won’t Get Far On Foot follows the artist from his giddy days as a Portland layabout, guzzling gin and chasing girls, only to have his life severely altered after a car crash left him quadriplegic at the age of 21. The rest of the film trails Callahan’s rocky road to sobriety, loosely framing the action around the AA 12 step program.  The resulting film is a sweet, surprisingly sober and somewhat patchy affair where strong performances are hampered by an underwhelming script stuck between two tones.

Van Sant’s directing style has always lent itself well to performances and here is no different.  Actors are given the space to skip through scenes with a refreshing playfulness, making it hard not to let out the occasional smile.  The same spirit carries over to the camerawork which gently shuffles through Portland’s nestled curiosities, giving the film a great sense of place.  And while although predominantly set in the ’70s, the movie never strains itself in reminding us.  Where other films are too busy shoehorning an era’s cultural cliches into view, Don’t Worry… paints a clearer picture by subtler means, from costumes to camera zooms we get to soak in the senses of time.

It’s a shame then that the film never feels comfortable in how to handle its story.  Straddling between moments of irreverence and sentiment we find a film struggling to find its voice.  We get the sense Van Sant is more interested in sifting through the familiar routines of recovery then exploring an artist at odds with civility.  The worst instance being the introduction of Annu, (Rooney Mara) appearing almost as an hallucination of delicate divinity – think Florence Nightingale with a dab of the Virgin Mary – there purely to pluck our protagonist from his post-operative blues.  The dark delights of Callahan’s scribbled anarchy seem diluted in convention, becoming a footnote to surrounding emotional hurdles.

The film excels through its performances where Phoenix effortlessly tumbles through countless emotional states, from anguish to forgiveness, dippy, dumb and daft, it’s a home-brewed charm both restless and skillful.  The supporting cast too boasts a collection of colourful characters, take Callahan’s fellow AA members, from Beth Ditto to the ever eerily enchanting Udo Kier, we see a sideshow unhinged in all the right places.  But it’s Jonah Hill who gives the most memorable performance as Donnie, Callahan’s sponsor turned quasi guru.  It’s quite a new look, with honey coated hair and a penchant for finer things the actor echoes a saintly Tom Petty, wafting through scenes with a tender glow.  In fact, the moments he shares with Phoenix are some of the film’s best.

Don’t Worry, He Won’t Get Far On Foot has all the pieces in the right place but nowhere to go.  What we get is a rather sanitized account, though sweet and well intentioned one can’t help but feel for what could have been given the right screenplay.  For a film that champions the contrarian, its form seems perfectly content to follow the current.  Notorious among locals for bombing down streets and veering across avenues, here Callahan’s story has been fitted with stabilizers as we soon find ourselves being steered by a pair of safe hands.

Review: Everything Everywhere All at Once