I first wrote the script for Little Doll in 2013. I was thinking a lot about my first crush on a girl in my class when I was about 7. I remember not really understanding my feelings at the time, but that was definitely the beginning of my journey as an LGBTQ person. So, I began to wonder when other people may have had their first inkling that they may be attracted to someone of the same-sex. I surveyed some of my LGBTQ friends and I was astounded that most people had feelings like this from as early as 4 years old. I thought that it was strange that I hadn’t seen any films that depicted this particular time in your life and so I started writing.

I was unsuccessful with many funding applications. I am unsure why, perhaps the content was a little bit too risqué for some people or maybe it just wasn’t what people were interested in at the time. I was about to give up hope when I got turned down for about the…6th time, when I decided to apply for Berlinale Talents 2014. They had a Short Film Script station there and to my surprise Little Doll and myself were in. There I was paired with a mentor who gave me lots of great notes, it was an amazing experience and most importantly it made me feel like the film was good and should be made. So when I got back I asked my friend from college Claire Nolan if she would produce it.

We set up an IndieGoGo campaign after another couple rejections from short film funding bodies, and we raised 3000 euro altogether. It wasn’t a lot considering it needed to be a 4-day shoot with a Toy Shop location, a school, and “two” houses technically. Luckily, at the time, Claire lived in a huge house where we shot all the house interiors, and a friend of mine worked at an Educate Together school and they were really eager to help after reading the script. We were surprised that we managed to get Toymaster on Mary Street to allow us to shoot there after hours – that was a really fun night actually all us got a bit giddy running around a Toyshop at 10pm. We went into production in early 2015.

Casting was great fun but also quite tough. The girls we did cast were amazing and so relaxed, and had no qualms about the content of the film. However, due to the content of the film some drama schools refused to even send the script out to parents. One girl also dropped out in the final stages of casting because she was afraid that her friends would think she was gay if they saw her in the film. Things like that were disheartening and made me sad at first but then I remembered – that’s why we are making this film, to change people’s perspectives.

We had an amazing crew all of whom gave their time absolutely free. I think again it was a belief that it was a special film with an important message that drove a lot of people to help us out. My long-time collaborator Philip Blake shot it on his RED (that he luckily had recently acquired), another IADT graduate Kevin Corry edited it over a very long 2015 summer, meeting up on weekends when we weren’t working. Also Steve Lynch, a composer I had worked with on some commercials at the time, said he would score the film for free. It is so encouraging when people want to give their time and creativity to a project like that free of charge. It makes you feel like “Yeah, this is a great film!”

We were really lucky to have our premiere at Berlinale 2016. They were really happy to have a Talent Alumni back and the festival opened loads of doors to us. We didn’t really have to pay submission fees to festivals because once you’re in Berlinale, festivals just ask you for screeners. It was quite a trip, going from being rejected constantly to now getting asked to screen at festivals all over the world.

Overall there are a lot of things I wish we could have done differently, our hands were tied with budget, time, etc. – but I forget all that when somebody comes up to me at a festival and tells me that the film has affected them in a positive way. I have had some parents come up to me and say that they want to open up a dialogue with their children about what it means to be LGBT.

Little Doll was a very personal project to me and I am so grateful to all the people along the way who believed in it enough to give their time to see it to fruition – otherwise it would still be an old Celtx file saved in an “Ideas” folder somewhere on my laptop. 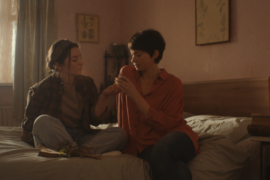 You Are Not My Mother: Review of Irish Film at VMDIFF