A new Irish short drama starring Victoria Smurfit (Once Upon a Time) has won the Grand Jury Prize for Best Screenplay at the Rhode Island International Film Festival. The Secret Market a contemporary mystery thriller written by Conor Ryan and directed by Martina McGlynn and Garret Daly, held its world premiere over the weekend at the festival that is ranked one of the top ten film festivals in the US.

Smurfit plays Amy McCarthy, a doctor who has risen through the medical ranks to become chief surgeon. She has a near perfect life until her past comes back to haunt her. The film also features Tadhg Murphy (Black Sails, Vikings), Mark Huberman (Frank, Noble), Camille O’Sullivan (Rebellion), Jonathan White (Love Rosie, Noble) and Eric Lalor (Fair City).

The film is the debut short from Limerick writer Conor Ryan. The Secret Market is produced by Martina McGlynn, Victoria Smurfit and Garret Daly through Mixed Bag Media. 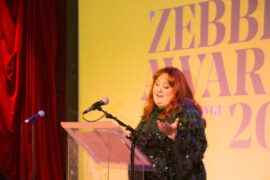