In its 18th year, Kerry Film Festival will continue to provide a platform and audience for the screening of short film programmes including international film exchanges, music documentary and selected feature films.

Kerry Film Festival, which takes place from 19th to 22nd October 2017 has previously featured successful shorts such as the Oscar® short-listed “Head over Heels” and Oscar® winner “Mr Hublot” and 2016 Oscar® winner “STUTTERER”. Four short films that screened at KFF in 2016 were nominated for the IFTA awards in 2017.

Filmmakers will have the chance for their work to be seen by a prestigious panel of adjudicators which has in recent years included Academy Award winner Benjamin Cleary, Directors Lenny Abrahamson and Paul Greengrass and Producer Finola Dwyer.

KFF 2016 saw the introduction of the Short Film Market in Killarney which brought industry speakers and guests including Sundance Grand Jury prize winner, Jim Cummings to the festival.

Closing date for submissions to the 2017 competition is July 14th 2017 www.kerryfilmfestival.com

Submissions are via FILM FREEWAY  (https://filmfreeway.com/festival/KerryFilmFestival) 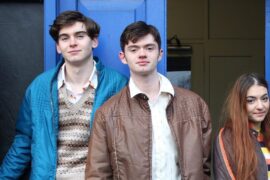