The DocArena Podcast: Episode 15 – Luke Sewell (Trust No One: The Hunt for the Crypto King) 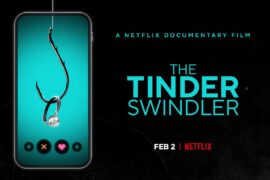