Keep an eye on the Irish films scheduled for release in cinemas in 2016.

I Am Not a Serial Killer (Billy O’Brien)

A troubled teen with homicidal tendencies has to hunt down and destroy a supernatural killer while suppressing his own inner demons.

Crash & Burn tells the story of Dundalk-born Tommy Byrne, who, for a fleeting moment in the early ’80s, was the world’s greatest driver

The Land of the Enlightened (Pieter-Jan De Pue)

A gang of Afghan kids from the Kuchi tribe dig out old Soviet mines and sell the explosives to children working in a lapis lazuli mine. When not dreaming of the time when American troops finally withdraw from their land, another gang of children keeps tight control on the caravans smuggling the blue gemstones through the arid mountains of Pamir.

A deconstructed biopic of the extraordinary Ambrosio O’Higgins, who left Ireland to become the captain general of Chile in the Spanish Empire.

Irish Londoner Harry Hambridge comes across an extraordinary testimony from his Grandfather, claiming that it was he who hoisted the Irish flag on top of the GPO during the 1916 rising and that the self same flag was hung upside-down in an army barracks in Hampshire, Harry knows his long awaited call in life has arrived.

A bittersweet and moving tale of friendship and the struggles of two men that is sure to delight audiences everywhere.

Irishwoman Mary Reynolds goes from an outsider to a champion at the Chelsea Flower Show.

Two teenage boys from Cork steal bicycles and ride off on a quest to find a missing bale of cocaine worth 7,000,000 euros.

‘Mad’ Mary McArdle returning to Drogheda after a short spell in prison – for something she’d rather forget. Back home, everything and everyone has changed. Her best friend, Charlene, is about to get married and Mary is maid of honour. When Charlene refuses Mary a ‘plus one’ on the grounds that she probably couldn’t find a date, Mary becomes determined to prove her wrong. But her attempts at dating are a disaster and she winds up feeling more alone… until she meets Jess and everything changes.

Explores the big question of faith, in a small Irish village.

Viva follows Jesus, an eighteen-year-old Cuban who is lost and struggling to realize his true identity. Unsure of himself or his future direction, he works at a local Havana drag club where he entertains dreams of becoming a performer whilst earning his money through hustling. At home he finds solace listening to the records his mother and grandmother left him. Into his life, however, comes a force to challenge his direction and free

A cinematic portrait of the Irish Republican martyr’s epic 66–day hunger strike that grabbed the worlds attention in the early 1980s.

Mom and Me (Ken Wardrop)

A creative documentary that delicately challenges the familiar love story shared between a son and his mother. It is a story that reveals comedy in the everyday and misery on some other days.

The Price of Desire (Mary McGuckian)

The Price Of Desire is the controversial story of how Eileen Gray’s influential contribution to 20th century architecture and design was almost entirely wiped from history by the egotistical ‘Father of Modernism’ Le Corbusier, and of how her relationship with philanderer Jean Badovici (Le Corbusier’s promoter by way of his influential architectural publication L’Architecture Vivante) further fuelled the rift between the two architects, both personally and professionally, consigning her legacy to a century of neglect and long-overdue recognition.

Who is Dervla Murphy? (Garret Daly)

A profile of Ireland’s most prolific travel writer who has written twenty four books, been on countless journeys, and has a worldwide fan base and massive critical success.

My Name is Emily (Simon Fitzmaurice)

After her mother dies and her father is institutionalized, Emily is placed in a foster home and in a new school where she is ostracized. When her father’s annual card fails to arrive on her 16th birthday, Emily knows something’s wrong. She decides to take matters into her own hands and, enlisting her only friend at school, Arden, sets off on a road trip to break her father out of the psych ward. As their journey progresses Emily and Arden become close, and both come to realize important truths about the nature of relationships, both to their parents and to each other.

A love story between a woman who has lost her son in tragic circumstances and the relationship she develops with a homeless youth.

Atlantic is the latest film from the makers of the multi-award-winning documentary, The Pipe (2010). This film follows the fortunes of three small fishing communities – in Ireland, Norway and Newfoundland – which are at turns united and divided by the Atlantic Ocean. In recent times, mounting challenges within their own industries, the fragile environment, and the lure of high wages for young fishermen on the oil rigs have seen these fishing communities struggle to maintain their traditional way of life. As the oil majors push into deeper water and further into the Arctic, and the world’s largest fishing companies chase the last great Atlantic shoals, the impact on coastal communities and the ecosystems they rely on is reaching a tipping point. Atlantic tells three very personal stories of those who face the devastating prospect of having their livelihoods taken from them, and their communities destroyed both environmentally and economically.

Having experienced a tough time at home, a young boy strikes out on his own and forms a band.

Harry is offered a new business proposition. Two people convert all their assets to cash, arrange to meet, dig one grave and fight to the death. Winner buries the loser and instantly doubles his value.

Set in a post-troubles Northern Ireland, The Truth Commissioner follows the fictional story of Henry Stanfield, a career diplomat who has just been appointed as Truth Commissioner to Northern Ireland. The story revolves around the lives of three men who are directly or indirectly involved in the disappearance, 20 years earlier, of the 15-year-old Connor Roche. Though Stanfield starts bravely, he quickly uncovers some bloody and inconvenient truths about those now running the country; truths which none of those in power are prepared to have revealed. Everyone claims to want the truth, but what is it going to cost, and who is going to pay for it?

He was one of those people who thought the end was coming. What if he was right?

The Parker family, new to the remote desert town of Nathgari, are thrown into crisis when parents Catherine and Matthew discover that their two teenage kids have mysteriously disappeared just before a massive dust storm hits the town. With the town now eerily smothered in red dust and darkness, the locals join the search led by local cop David Rae. But scorching temperatures mean the chances of survival are plummeting with each passing day and Catherine and Matthew find themselves pushed to the brink as they struggle to survive the uncertainty of their children’s fate.

To Jack, Room is the world…. It’s where he was born, it’s where he and his Ma eat and sleep and play and learn. But while it’s home to Jack, to Ma it’s a prison. Through her fierce love for her son, Ma has managed to create a childhood for him in their ten-by-ten-foot space. But as Jack’s curiosity is building alongside Ma’s own desperation – she knows that Room cannot contain either indefinitely.

Shem The Penman Sings Again is an experimental feature film that provides a way into James Joyce’s creative imagination and the conception of “Finnegans Wake”.

A true tale of survival in Somalia told from the pirate’s perspective.  The film takes an innovative hybrid approach to explore how one Somali pirate – Mohamed – came to live such a brutal and dangerous existence.

dom – his long-lost father Angel, once a celebrated boxer and newly released from a 15-year prison term.. 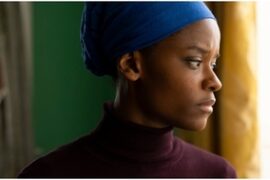