Ireland On Sunday presents the Irish premiere of Pauline Bewick: Yellow Man, Grey Man, Maurice Galway’s portrait of the artist. Steven Galvin chatted to the director about his film ahead of its screening this Sunday.

On Sunday, 9th June the IFI’s monthly showcase, Ireland on Sunday, presents Pauline Bewick: Yellow Man, Grey Man, an intimate portrayal of one of Ireland’s most acclaimed artists. Directed by Maurice Galway, himself an artist and the CEO/Artistic Director and founder of the Dingle International Film Festival, the documentary examines, in a creative way, the hugely successful series of works by Pauline known as The Yellow Man, and illuminates an equally important, but much less well known, series of works, the Grey Man Drawings.

Maurice had always been a great admirer of Pauline’s work before eventually befriending her “12 or 14 years ago”. He recalls meeting her for the first time, when he walked into her studio and there was an old Russian painting she’d found many years ago of a fox – “We had this wonderful conversation about foxes and immediately got on very well and a relationship formed. I’d meet her now and again. Then I had an exhibition in Siamsa Tire called ‘Gimme Shelter’. Pauline had a very powerful crucifixion piece she’d done a few years beforehand. I asked her could I exhibit the piece. She asked me about my own work, a short film I had made called Fallen Angels, with 2 wooden angels hand-carved in 1846 – one I set alight; one I put out onto Barrow Beach and drowned. It’s a very emotional piece and when Pauline watched it, she cried. She said, ‘I’ll exhibit the crucifix beside that film.’ That was the start of working with her.

“I was always interested in her; her stories are fascinating. So I approached the idea initially with her that I would curate an exhibition around her and that it would be film-based; but out of that came this film, as I knew I wanted to do something more about her.”

And so the film is more than simply a retrospective of her career and it’s clear Maurice wanted to explore Pauline as an artist and as a person, capturing her talking about herself on a more emotional level, and rummaging around the questions of who is this Yellow Man and who is this Grey Man that appear in her work.

“I wanted to get to know her a bit more and find out what she feels and what she thinks. How is she emotionally when she’s making this work? I knew from talking to her over the years that the Yellow Man did stem somewhat from her time with Utanga, who she had an affair with in the South Sea. Although she first drew The Yellow Man in Tuscany.”

The Yellow Man, which Pauline is best known for, represents an ideal life style and philosophy, but what about the Grey Man, that up until now had never been exhibited? “They are one and the same,” Maurice explains, “two parts of a whole.” Pauline first exhibited the Yellow Man in the RHA in Dublin in 1996. Maurice recalls how Anthony Clare, the psychologist, opened the exhibition and he talked about how the Yellow Man was a “celebration of life; encouraging us to remove ourselves from the bustle of life and to sit back and admire things. But around that same time Pauline started drawing the Grey Man, as she would call it.  That came about because she was seeing a gestalt therapist. During a session with her she did a drawing that appeared as this dead figure. Going through the process of analysis she realised it was her father, who had abandoned her when she was about two and a half years old. This was the first time she began to acknowledge what this was and that throughout her life she’d had a great lack of trust in men, blaming them for all the wrongs in the world, but when she began to realise that this all stemmed from her father abandoning her she began to change her attitude.”

But Pauline never exhibited the Grey Man. Only now were the drawings shown for the very first time at the Dingle Film Festival in March – up to then they’d never gone on public display and now, appearing in the film, will be the first time many people have seen them.

“Pauline attributes the Yellow Man to her Mother, who was a very free thinker, a radical – and she gave Pauline a tremendous sense of freedom and insists that she was an artist. This freedom is a major attribute of the Yellow Man. Whereas in contrast, the Grey Man represents those restrictions in life and represents a ‘down time’ as Pauline calls it. Like many people Pauline gets down at times, and the Grey Man very much represents that.”

The film achieves a level of intimacy that is obviously a reflection of the trust between the filmmaker and his subject. Pauline’s openness is both celebratory and revealing and makes for a beautifully insightful and fascinating documentary. “There’s a wonderful piece by her,” Maurice says, “it’s a self-portrait where she’s on all fours, naked, pregnant – and I asked her about that piece once; she just said how horrific it was to be pregnant, like this wild animal with this being inside in her – and that was her being honest. Pregnancy didn’t suit her, she didn’t like it.  She’s always been open about her life – even be it her affair going off to the South Seas and living with a ripped-up young man for 6-7 months.”

One of the things that shines through the film is Pauline’s tremendous sense of humour, which Maurice identifies “has been in her work all her life.” She attributes humour to getting back with her husband Pat. “They saw a marriage counsellor and Pauline told me they laughed and laughed in every session and it reminded her how much she loved him.”  Throughout the film, that humour is manifested in her bond with nature that is a constant reference point for Pauline. At one point she posits that “women who like frogs are very well adjusted.”

The film begins with the quote “to marvel is the beginning of knowledge and where we cease to marvel we may be in danger of ceasing to know.”

“It’s a Greek quote,” Maurice explains, “it’s been attributed to Plato but I’m not 100 percent sure. Going back to Anthony Clare, he actually used the quote when he opened the Yellow Man exhibition and he said that Plato asks us to marvel at life and this is what the Yellow Man is asking us to do – to marvel at the beauty that surrounds us.”  Pauline tells us in the film that the Yellow Man has a tiny penis that is “not for use” and, according to Maurice, “it’s important to Pauline that he’s not a sexual being and he can walk around naked at one with nature and sexuality doesn’t interfere with him; he is able to simply marvel at what surrounds him.”

There’s a wonderful sequence in the film of a dancing fox. Maurice recalls ringing Pauline and telling her that he’d had a dream of dancing with her as a fox and “she got terribly excited telling me that it was the perfect symbol because to her, she’s always tried to capture nature in her work and in her life and she finds nature both cruel and beautiful. The fox is that symbol. So that dance becomes a waltz between beauty and cruelty.”  Similarly so with the Yellow Man and Grey Man, both intertwined and an inseparable part of the other.

Despite being made for little to no money, Maurice was able to call upon the talents of friends of his to help give the film its own beauty. Eugene O Connor was DOP, who has worked on The Beatles Anthology, Fr Ted and countless music videos. And, providing the music was Nico Brown, who has worked with Mike Leigh, Alan Parker, and PJ Harvey, among others. Nigel Cole provided the wonderful stills for the film.

“Everybody worked for free. There was no financing. Nico Brown and Martin Brunsden doing the music – the music is very important. When I started, Pauline gave me access to everything – she went away on holidays –  her house, her studio, all her archives for a 2-week period. At that point, Nico Brown had written 3 pieces of music for me so I was listening to that, which really helped me create images for the film while I was working at Pauline’s. A lot of the cutaways are done on a small Sony camera I have. Martin came on board at the end and they composed and performed everything for the film.

“And I worked closely with the FAS Film & TV Training course here in Tralee. I’ve a good relationship with Brian Nolan and Paul Dolan there so the deal was, I bring Eugene O Connor on board and they provide crew and equipment; so their students are getting on-the-ground experience and I get to use the RED Scarlett, a Canon XF305, tripods, lights and the like; so again massive savings. Brian Nolan, who’s an editor himself, worked with me afterwards on the film, cutting it and grading it, so all done for a few shillings – but I had to make them all dinner and cook too during the shoot!”

The film is set to screen this Sunday and Maurice is delighted the IFI are screening the film. “I spent a lot of time there when I was a student so it’s very exciting. It was Ross Whitaker who suggested that I contact Sunniva [O’Flynn – IFI Curator] about the Ireland on Sunday programme, which is what I did. Sunniva took a look at the film, liked it and programmed it.

“At the minute now I’ve started making submissions to different festivals. So far I’ve been really lucky with the IFI screening and RTE have picked it up with the plan to screen it a couple of times over the next two years. Obviously as well I’d like to get it out it to a few festivals.”

Tickets for Pauline Bewick: Yellow Man, Grey Man are available now from the IFI Box Office on 01 679 3477 or online at www.ifi.ie 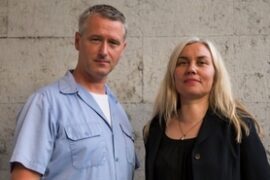 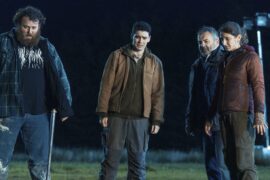