What do you do when the life you’ve carefully been building for years crumbles before your eyes? This is the dilemma faced by our protagonist Adrian (Cilléin Mc Evoy) in Irish musical-drama The New Music. A classical pianist who has an exciting musical career ahead of him, Adrian’s life is turned upside down after a diagnosis of Young Onset Parkinson’s Disease.

Unable to face the truth of his condition, Adrian flees to Dublin without telling his family and friends. He moves in with three lively punk band members, David (Patrick O’Brien), Will (Jack Fenton) and Jodie (Martina Babišová), whose approach to life greatly differs from what Adrian is used to. Initially, Adrian resists his housemates’ attempts to befriend him, and he scoffs at the music they play. He finds himself unable and unwilling to let go of the life that he has lost. However, he gradually begins to warm to his roommates and the imperfection of punk music. The film does not make a saint of Adrian – he can be needlessly rude and thoughtless, but through the support of his new-found friends he begins to let his guard down and cope with his illness.

The film’s best scenes are those that focus on the relationship between our four main characters, whose interactions are filled with heart and humour. The film accurately captures the student lifestyle in which there is little money, a filthy kitchen, disappearing toilet paper and a lot of laughs. Dublin shines as the group race around the city advertising their band The Cellmates and downing pints. The central message of the film is that things do not have to be perfect to be worthwhile. It also explores the power of music to offer solace and healing. As Adrian finds himself drawn to punk music more and more, Will remarks “our shitty songs moved you and hey, that’s fine, I mean, isn’t that what music’s all about?”. The film demonstrates that music can still bring Adrian joy and comfort – he just needs to be open to a new form of music. Accepting one’s vulnerability and having the courage to bear your heart to the world is a key idea that the film explores. In a tender scene, Adrian remarks that he never really felt scared performing classical music because it had been written by someone else, but when playing the band’s songs “there’s no place to hide”. The draw of the punk band is their unfailing honesty and openness. In punk music, nothing is too unpleasant to deal with.

The film’s pacing is uneven in parts, particularly in the third act when it loses some momentum. Jumpy editing also leaves the viewer a tad disoriented at times. That said, this movie has real heart and an uplifting message that carries it through. There are times when the action falters, but the evident passion and earnestness throughout compensates for any stilted moments. Martina Babišová gives a touching performance as drummer Jodie, who finds herself struggling to get close to Adrian. Jack Fenton and Patrick O’Brien also demonstrate their comedic talents through a number of enjoyable witty exchanges. The soundtrack is excellent, an eclectic mix of artists such as Shit Present, Crywank and Beethoven. It also features original music by David Sangster, an English musician who has Parkinson’s disease. The thumping drums and punchy guitar drive the movie forward as Adrian explores his new life, and classical piano pieces frame his more reflective moments effectively.

This is a powerful debut from Italian director Chiara Viale and it showcases the talents of its core cast well. A simple story, but a moving one none-the-less. 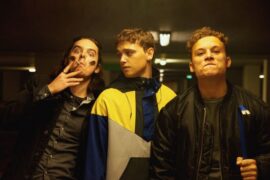 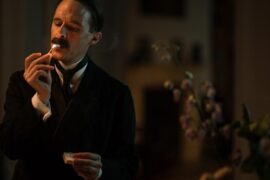