In this podcast, Paul Farren talks to Irish journalist, film historian and author Wayne Byrne about the craft of writing about film.

From his early days reviewing films for the Leinster Leader, through writing his first book, Include Me Out: The Cinema of Tom DiCillo, to working on his latest project on the Nightmare on Elm Street franchise, Wayne reflects on his journey to date and how he approaches writing about film and why he does it.

As part of Culture Night tonight Friday, 18th September, Wayne launches his latest book ‘Nick McLean – Behind the Camera: The Life and Works of a Hollywood Cinematography’ with Nick himself in conversation with Paul Farren.

Join them at 7pm online at

Wayne Byrne is a writer and film historian. He is the author of Include Me Out: The Cinema of Tom DiCillo, Nick McLean: Behind the Camera – The Life, Work of a Hollywood Cinematographer, and Burt Reynolds on Screen. He has written for Hot Press, Books Ireland, Film Ireland, The Dark Side, the Irish Times, and other publications.

Wayne is currently writing a book on the Nightmare on Elm Street franchise, in which he interviews many of those who made the legendary horror series. The book is due out next year by McFarland Publishing. 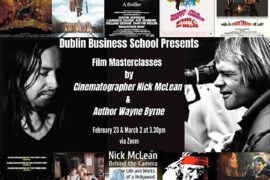