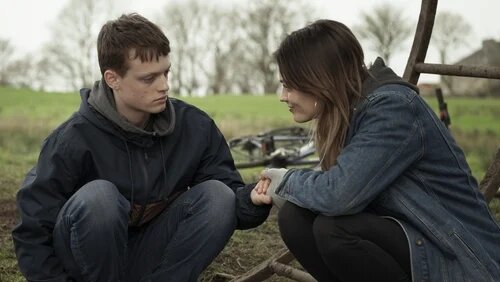 Director Phil Sheerin’s feature debut, The Winter Lake, is a dark coming-of-age drama that follows withdrawn teenager Tom (Anson Boon) and his mother Elaine (Charlie Murphy) as they return to an old family home in Ireland following an incident in Leeds. Here, they befriend their neighbours – the outwardly confident Holly (Emma Mackey) and her father Ward (Michael McElhatton) – and relationships are tested all around as grim truths are slowly revealed.

Evocative of the turlough (a type of lake that recedes and refills) at the centre of this film, tensions lurk beneath the surface in every scene, ready to spill over at any moment. Strong, emotional performances by the four key actors deliver and maintain this tension throughout the film, along with careful pacing and atmospheric cinematography. Ruairí O’Brien captures the rural Sligo and Leitrim scenery in expansive shots that, combined with the wintery, misty greyness, establish a sense of isolation. The pattering of rain and howling winds that often pervade the scenes add a layer of eeriness and feeling of foreboding that is reaffirmed throughout the film through references to the lake as a “dangerous place”. This works both literally and metaphorically, as the lake is used as a way to reflect on some of the darker aspects of humanity.

The environment established in the film underscores the emotional duress that the characters face, often on their own – be it struggling with parenthood, feeling alienated and adrift, or dark secrets and traumas. These individual struggles begin to intertwine and reach a collective, violent breaking point where the characters are forced to confront not only each other, but themselves. A subtle well-balanced approach is taken in the portrayal of the characters that reflects good and bad qualities for them all, showing their humanity at the same time as poor decisions and even cruelty, while punishing the worst of their acts. Poignancy is found in quiet, still moments throughout the film that build towards its confrontational climax.

While a sense of bleakness infuses much of the film, it does offer a somewhat hopeful resolution. Holly explains to Tom at one point that when the water of the turlough recedes, it “sucks things under” with it. Perhaps what is left behind can be used to start anew, and those left standing can begin to move forward. The events of the film act as a catalyst for the characters, who seem to have been treading water up until this point, to face their problems. Importantly, there is no suggestion that these problems are neatly resolved within The Winter Lake’s 92-minute run-time. Instead, following its realistic approach, the film finds a conclusion in a sort of new beginning for its characters, who have a long journey ahead of them as they start to work through those things that they had been burying.

From the same writer (David Turpin) and producers as The Lodgers (2017), and as atmospheric and visually impressive as that film, The Winter Lake is an intense character study. Its serious subject matter makes for uncomfortable viewing at times, but is delivered in a nuanced way. The Winter Lake packs an emotional punch – in turns haunting, painful, gentle and hopeful – and marks a strong, carefully constructed feature debut for Sheerin.