Ahead of the 2020 Dublin International Film Festival, three filmmakers whose films are screening at the festival joined Gemma Creagh on the latest Film Ireland podcast. Pictured above, Tristan Heanue (Ciúnas), Iseult Howlett (The Grass Ceiling) and Suri Grennell (Wrath) came into the studio to talk about their films and the craft of filmmaking.

At the precipice of womanhood and plagued with foreboding dreams, Maria must confront the mistrust of her family as a strange epidemic sweeps through Ireland.

Suri Grennell is a writer director with a degree in Film & Television Production from the National Film School at IADT. Since graduating in 2015, her short films have screened at Galway Film Fleadh, Kerry Film Festival, Fastnet Festival, Offline Festival and Clare Island Festival. She is on a steadfast mission to tell female stories that engage, challenge and excite.

A couple embark on a journey in the midst of a family crisis.

Tristan Heanue is an award-winning filmmaker from Connemara, Co. Galway. He began his career as an actor before moving into writing and directing in 2013 with his debut short film In This Place.

His second film titled Today premiered at the Galway Film Fleadh in 2015 where it won the award for Best Debut Drama and he followed that up with ‘A Break in the Clouds’ in 2017.

His latest film Ciúnas (Silence) which was the winner of the 2018 Físín Script Award at the Dingle Film Festival premiered at the 2019 Galway Film Fleadh where he became the first short filmmaker to be nominated for the Bingham Ray New Talent Award. He most recently won the Irish Screen America ‘Rising Star Award’ for his work on Ciúnas and the Grand Prix at the 64th Cork Film Festival.

“Team sport does something to a girl. You get to think about your body in terms of what it can do, rather than how it looks. You become more engine than ornament.”

This short documentary film vividly captures the raw physicality of team sport, you can feel the grass stains on the players’ knees, the flowchart of bruises on their bodies. Three successful female athletes explore what drives them to play, how the punishment, effort and joyful reward in sport reveal something essential in the human spirit that is often elusive for women; how being physically courageous, unapologetically competitive and deeply passionate can unlock a freedom to really occupy your own skin.

Iseult Howlett has been crafting stories for screen for almost 20 years. She is a multiple IFTA nominated editor and has cut a number of award-winning documentaries and short films. The Grass Ceiling is Iseult’s directorial debut. 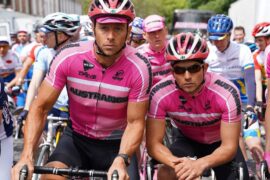