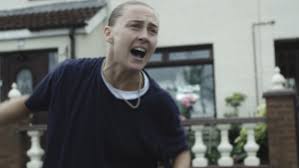 Ten short films produced under Fís Éireann/Screen Ireland’s Focus Shorts and Real Shorts schemes had their world premiere at the 64th Cork Film Festival on the 16th of November. Mags O’Sullivan of Screen Ireland introduced the programme of shorts by noting that 60% of them were directed by women and that 50% had female screenwriters, highlighting Screen Ireland’s commitment to diversity and gender equality, which was evident across these shorts. The films ranged in their mode of expression and style—encompassing animation, documentary and live-action—but all engaged with types of community and identity, making for interesting comparisons and showing off Irish talent.

Lorraine Lordan’s A Cat Called Jam opened the programme with the humorous tale of a cat who sees himself as a dog and just wants to be part of the pack. Despite reactions suggesting he doesn’t quite fit in, Jam is persistent in his mission, lightheartedly singing about meat and chasing his tale like the other dogs. A beautifully drawn and well-crafted animation, this short has an uplifting message about finding the place you belong for yourself and being who you want to be. This message carried across several of the other films, with A Cat Called Jam offering an excellent start to the group.

The second film of the selection, Bryony Dunne’s Above the Law, explored communities in transit, cleverly drawing comparisons between paths of migratory birds and the, usually fraught, journeys of refugees and migrants. While the birds move freely, as they wish, between locations, closely examined only by birdwatchers, the refugees are instead seen by surveillance cameras patrolling borders, or those who must be ready to rescue them from overflowing boats. Moving between Cairo, Lesvos and Donegal, with narration from both migrants and those looking out for them, the film lets us literally fly along with the birds (with cameras attached) as we are grounded by the words spoken by these individuals. Above the Law faces difficult realities in a poetic and hopeful way, drawing to a close with a Syrian refugee in Ireland commenting that his “Irish passport is now [his] wings”.

A Better You, written and directed by Eamonn Murphy, brings us to a well-designed modern steampunk world with the advanced technology of programmable carbon clones alongside computers that are cranked to scroll through pages as you would archival material. In this setting, a shy man, Douglas (Seán T. Ó Meallaigh) finally decides to purchase a “better version” of himself to go on a date with a girl he likes. Ó Meallaigh’s performance and the production design are both very strong and, after some light-hearted scenes setting up the clone, we are left with a similar message to that in A Cat Called Jam—that it is best to be yourself.

Ruari Robinson’s Corporate Monster takes a turn toward horror as an overworked and recently laid-off man in NYC takes some untested pills to help with his exhaustion. These further unravel him, causing him to see monsters all around him who pose as humans—from policemen to his former boss. Are the pills making him unstable, causing him to go on a rampage, or are they exposing the truth of the creatures living amongst us? The fast-paced Corporate Monster keeps you guessing with its impressive looking creatures, and makes you consider the perils of losing oneself in work and greed. It also offers some well-placed political commentary as the first appearances of these creatures are surrounding Trump on the stage during a televised speech.

Welcome to a Bright White Limbo, directed by Cara Holmes, documents the creative process of dancer and choreographer of Oona Doherty. As Doherty explains that she had moved to Belfast from London, didn’t feel she fit in, and found a way to express herself through movement, we see her practicing her choreography in the street of a housing estate, as well as in an auditorium. This movement embodies not only herself, but the local identity. Welcome to a Bright White Limbo is artistically shot, capturing the arresting and emotive movements of Doherty, and offering insight into the thoughtful construction of her award-winning show, Hope Hunt.

In Claire Byrne’s Sister This, a simple phone conversation between two sisters reveals a depth of emotion and shines a light on the struggle to get by, and what is sometimes sacrificed to do it. With one sister abroad for work, and the other taking care of her son, they argue over the mother missing the boy’s birthday and about the safety of her line of work. Charlie Bailey and Jordanne Jones deliver strong performances as the sisters, packing this short with an emotional punch.

Based on Ryan’s essay “The Fear of Winning”, Iseult Howlett’s cleverly named The Grass Ceiling is a short documentary in which three of Ireland successful female athletes—Rianna Jarrett, Elise O’Byrne White and Ryan herself—relate what sport means to them. Through this a portrait is spun of powerful, inspiring women who resist constrictive and conservative gender expectations. Finding their place and their confidence through their athleticism, these women serve as strong role models. The Grass Ceiling rightfully showcases their talents and perspectives, which are often overlooked in favour of the male athletes who are more frequently in the spotlight, and is itself a powerful and inspiring film.

Sophia Tamburrini’s Maya stars Pat Shortt as Ken, who lives happily connected to a machine that simulates his reality using his memories. However, as his payments for this run out, he will soon be confronted by reality. Maya sensitively explores loss and what grief can do to a person—replaying memories and subtly overwriting them through time until we are faced with a new reality. Tamburrini smartly uses elements of sci-fi in this film as a way to confront what are equally natural processes.

Kalchalka, directed by Gar O’Rourke, documents “the world’s most hardcore gym”—Kiev’s outdoor Soviet scrap metal gym, offering a snapshot of the day-to-day running of this unique place and the variety of individuals that use it. Well put-together shots tell the story of this space as its caretaker brings us through it, providing several humorous moments. The gym equipment and construction is interesting in itself, but the glimpses we are given of the characters that populate it leave an even bigger impression. Personalities are well-captured here, often simply through gesture.

Finally, rounding off the programme was Brendan Canty’s Cork-based Christy, which received quite a few cheers from the home crowd. This short follows a 16-year-old as he goes on a disappointing job interview and is brought back to good spirits by his friends. Showing off plenty of Cork charm, in a similar vein to The Young Offenders, the film deftly moved between heartfelt moments and humour, ending the Screen Ireland World Premiere Shorts with plenty of laughs.