In Ribbons has come to the end of its festival journey. Over the last three years, the film has been welcomed at almost forty festivals worldwide, the latest screening at the 2018 ‘Disappear Here Film Festival’ in Donegal.

Set in 1960s Ireland, In Ribbons begins with young Laurie excited and carefree as she goes for a walk with her Dad… until they reach the grounds of an ominous, grey building. As the door closes on the only world she knows, darkness envelops her and she is abandoned to a place of fear, an orphanage, where silence rules and identity is stripped away. Laurie however, holds firm to her sense of self, her spirit and resilience through the power of her dreams and her memories. The final scene shows Laurie, defiantly clutching a lock of her hair as she peers up at the moon.

Apart from a few ethereal words that echo from ‘Laurie’, the screenplay contains no dialogue, an essential exclusion from the beginning for the screenwriter. As the story moves from joy to fear, and light to dark, Caroline’s vision was to draw the viewer into a journey with the main character through her heightened, though childish, sensual experience. Therefore, a hugely important element of the story narrative was the sound, which was expertly engineered by Neil Horner.

The story is quite personal to Caroline, though she stresses that it is not a judgmental one and does not sensationalize what was a very profound experience – not just for ‘Laurie’, but for thousands of children like her, taken on that same journey, some unwittingly tricked, some kicking and screaming, some so damaged, so desensitized that it didn’t really matter what the destination was.

Written and co-produced by Caroline Farrell, the film was directed and edited by Marie-Valerie Jeantelot, who also co-produced. With the expert guidance from Tom Dowling, who came on board as Line Producer, the team gathered an incredibly talented and generous cast (Patrick O’Donnell, Geraldine McAlinden, Melissa Nolan and Rebecca Waldron), and being an Indie production, a crowd-funding campaign was organised, and raised one quarter of the budget through donations from some very generous friends. The team also applied for a bursary from Kildare County Arts Service, which was successful, and raised another quarter. Caroline and Marie-Valerie covered all remaining expenses.

The film was shot over three days, at three separate locations, including the Grangegorman building (the former mental hospital, St Brendan’s) which replicated the ominous façade of Goldenbridge Orphanage. 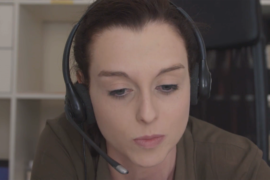 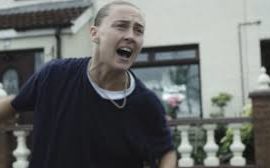 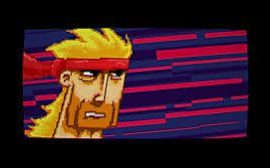