Denis Condon’s blog Early Irish Cinema looks back at the early development of cinema in Ireland on the anniversaries of those developments and offers information on what cinemagoers could have seen in Irish cinemas a century ago. Here Denis explores how the cinema picture was increasingly a weapon of war in Ireland.

A range finder telegraphs the location of German positions in With Britain’s Monster Guns;Imperial War Museums.

Many people experienced the British Army’s Somme offensive, which began on 1 July 1916, as a cinema picture. Not for the first time, cinema took its place among the print media in eliciting support from the British and Irish populations. Irish newspapers reported how this happened in London. “London was in a state of great excitement yesterday afternoon and evening on the news from France,” the Irish Times’ London correspondent reported.

It was just after one o’clock when the evening papers came out with the news, and Fleet street was quickly alive. The papers seemed to seen in thousands, and anybody’s paper was public property, for if a person stopped to read the news he was a once surrounded by people who also wanted to read it as well.

However, not every Londoner learned the news from the press: “The news quickly spread to the West End, and lively scenes were witnessed in some of the restaurants. At the Coliseum the news, flashed on the cinema screen, set the house cheering with enthusiasm, a group of wounded men leading off” (“London Correspondence,” Times). According to the Freeman’s Journal’s London reporter, it was not just in the Coliseum that this occurred. “In some of the cinema theatres the management rose to the occasion by flashing the text of the communiqués on the screen,” s/he observed, “and the audiences cheered lustily as the welcome words appeared” (“London Correspondence,” Freeman).

The Cork Examiner reported that picture houses were also responsible for such manifestations of popular enthusiasm in America, which had not yet entered the war. “General Haig’s late despatch from headquarters announcing the capture of German trenches and various villages,” the report read, “arrived here between nine and ten o’clock last night, and at many of the cinema palaces was thrown upon the screen and cheered by crowds” (“American News”). In this way, cinema extended the propaganda function of the press into the largely entertainment spaces of the picture houses, in both the British capital and in a neutral but assumed friendly country.

Soldiers at the Somme used cinema – a sometimes overwhelming spectacle – to describe their experiences of war. The explosion of a mine at Beaumont-Hamel featured in many accounts, including that of an unnamed sergeant who “with great glee” and “unusual power of description, said it reminded him of the pictures you sometimes see in cinemas of petroleum stores blowing up – always in America.” This soldier’s descriptive powers were unusually bound up with cinema:

“I’d been in that part of the line for some time,” he said, “and, Lord, how we used to curse that mine. Fatigue parties always were wanted to carry the stuff out, and then later on to take in the explosives. The exploding chamber was as big as a picture palace (the sergeant’s mind seemed to run on the cinemas that morning) and the long gallery was an awful length.” (“Advance in West.”)

This sergeant was not the only soldier whose imagination was fired by cinema. Fund-raising in Ireland ensured that Irish soldiers in France could also spend their leisure time watching films. In early July, the half-yearly meeting of the Cork Branch of the Irish Women’s Association for providing comforts for prisoners of war and men of the Munster Fusiliers read a letter of acknowledgement from General Bickie, commander of the 16th (Irish) Division for the £100 they had sent towards providing a recreation hut and cinema show that would travel with the division (“Comforts for Munster Men”). 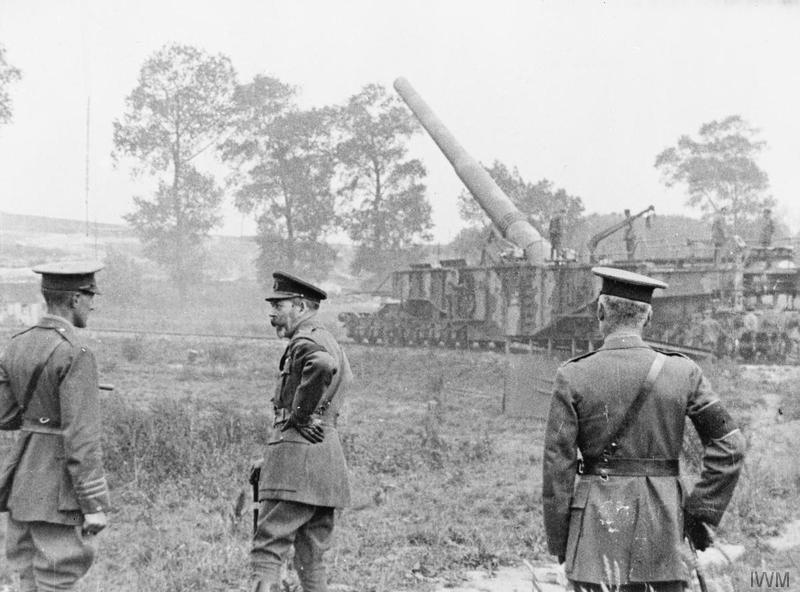 One of the monster guns in With Britain’s Monster Guns in Action (Britain: British Topical Committee for War Films, 1916); Imperial War Museums

In Ulster, the Somme would immediately become part of the iconography of Unionist resistance to both Home Rule in Ireland and the more violent nationalism that had been manifest in the Easter Rising. Of the many accounts during the month, an early one reported prophetically that the “heroism and self-sacrifice of the Ulstermen in particular continues to be the theme of mournful praise, and henceforth in Ulster the 1st of July will have a new and more glorious, if more sorrowful, meaning, into which no shade of contention can enter” (“Battle of the Somme”). Unionist leader Edward Carson clarified which kind of contention was to be excluded when he paid tribute to the spirit of “no surrender” associated with Ulster Unionism (“Glory of Ulster”), and articles in the Belfast papers named and honoured the dead (“Ulster’s Sacrifice”).One soldier – who unlike the unnamed sergeant was identified as Irish – made a strong link between war and cinema. In a letter that was published in the papers, Private W. Campbell of the Derry Volunteers recounted to a friend his experiences of the 1 July attack by the Ulster Division. “You should have seen our boys advancing, the Derry and the Tyrone Volunteers leading. It was a fine sight,” he wrote,

something you would see in a cinema – chaps falling beside you and you going on making for your objective, shrapnel bursting above you, and high explosive shells bursting around, and machine guns sweeping the ground. You would wonder how they were able to advance; but our boys got the length of the fourth line of the Huns’ trenches, but had to retire to the third line, as there was a danger of their being cut off. We took about 600 prisoners; they belonged to the Prussian Guards. (“Somme Battle.”)

The strength of cinema in Ulster was emphasized when two new picture houses opened in Belfast at either ends of July 1916. The Duncairn Picture Theatre made its debut first, on Monday, 3 July. Seating 1,200, it was one of the largest of the city’s cinemas and was located north of the city centre on Duncairn Gardens. “From the start of the performance at 6.30 p.m., until late in the evening,” the Irish News reported of the opening night, “long queues were formed up, and had it not been for the commodious character of the hall, many people would have undoubtedly been disappointed” (“Opening”). Designed by F. J. Waddington of Blackpool, it “presents an imposing appearance to Duncairn Gardens,” and the elaborate decoration of its entrance hall included “wood panels some eight feet in height and made of African mahogany,” while in the finely equipped auditorium, “the decorative treatment [was] in light Italian Renaissance” (ibid.). The tea lounge, “illuminated by soft coloured lights, is designed in such a way as to permit of patrons commanding a clear view of the screen without leaving the tables at which they are seated” (“Duncairn Picture Theatre”). Belfast’s “super cinema,” as it was soon calling itself, was managed by William Hogan, and its orchestra was conducted by J. Finlay.

More centrally located on York Street, the New York Cinema opened on 31 July. The newspapers paid more attention to the films it showed than to its design – the work of experienced picture-house architect Thomas Houston – although the Belfast News-Letter did observe that “every patron will have a full view of the pictures over the head of the person immediately in front without necessitating the removal of hats” (“New York Cinema”). It had 750 seats and was managed by Samuel Stonehouse for Fred Stewart, who also owned Belfast’s Panopticon.,

Despite the strength of picture houses in Belfast and the use of cinema imagery in discussing the battle of the Somme, it was Dublin’s theatres and pictures houses rather than Belfast’s that featured the new official war films. These did not yet include The Battle of the Somme, which was still in production by the British Topical Committee on War Films and would appear in August; the shorter films shown at matinee screenings in Dublin’s Theatre Royal during the week of 17-23 July instead included items on the recently killed Lord Kitchener and the spectacular celebration of military hardware With Britain’s Monster Guns in Action. “It shows in a thrilling manner,” the Irish Timesenthused of the latter, “how the guns are got ready for action, how one of our airmen observes the fire of the 12-inch howitzers on the German lines, how messages are sent from a height of 8,000 feet to open fire, how the range is corrected, and how our gunners effectively strafe the enemy’s lines (“‘Britain’s Monster Guns in Action’”). TheDublin Evening Mail argued that these films would not only be of interest to those with relatives and friends serving at the front but also had educational value for “the young soldier who is undergoing his training [and] every student in our public schools and colleges” (“Official War Picture Matinees”).The military tenor of the event was maintained by the engagement of the Faugh-a-Ballaghs, the band of the Royal Irish Fusiliers, which played a special selection of music at each performance. “War pictures hitherto were usually sandwiched between Charlie Chaplin and similar films,” the Early of Derby argued at the films’ launch. “I think it is rightly felt that this ought not to be.” He also pointed out that the young were not the only target audience: “One of the objects of these films is to show the people of this country what we are doing in France with their brothers, their father, their husbands and their sons” (“Latest New Official War Pictures”).

Overall, the cinema picture was increasingly a weapon of war in Ireland in July 1916.